NOTE:  This is the final part of a 6 part series about a family vacation to Florida

Friday, October 24, 2008 – We slept in (at least I did – my husband got up with the kids) and packed up and decided to depart early.  We were toying with the idea of renting an air boat to take into the swamp, but it was overcast again, and we weren’t sure how the kids would fare in the swamp.  So we headed out of the Orlando area, and we stopped at two beaches.  The first one was not memorable, and I don’t remember where it was – somewhere south of Flagler beach because we stopped there next after heading north up the coast.  The first beach had crushed shells for sand and it was still overcast and windy which made it a little chilly.  It was really cool to see two different moods of the ocean this trip; especially since we’re used to landlocked Ohio.  Well, we have Lake Erie, but that’s not the same as the ocean.  On the way there, it was a beautiful blue/green with soft, rolling waves.  On the way home, it was gray, and the waves had white caps and sometimes a large one would sneak up and catch us off guard and soak us.  At Flagler Beach, we found a coconut and a log, which we took with us – only after asking the park ranger on duty, of course.  He was friendly, and he said that coconut must have come a long way – and now it calls Ohio home!  Flagler Beach is a Florida State Park, and it was very nice.  There was a ramp leading down to the beach for the wheelchair-bound or strollers.  And the bathrooms were very nice for being outdoor state park bathrooms – they should have been a step away from port-a-potties, but these were really nice and clean too.

Since we were ahead of schedule, we decided to spend the night in a hotel, so we stopped outside of Savannah, Georgia at a Comfort Suites in Pooler.  It was a nice place, and we went swimming in the morning.  I think their chlorine content in the pool was way high because my husband’s eyes were burning and for weeks my girls and I had problems with our hair.  It was getting tangled really easily, and it wasn’t smooth or soft anymore.  My husband held my ponytail up to the hair closer to my head and there was a huge color difference – the ends of my hair were shades lighter than the top!  I have long hair, so I think the bottom part of my hair which was in the pool the longest got bleached by the chlorine.  I actually haven’t had the time to go and get it chopped off, but it seems to be getting back to normal now, thank goodness.

Saturday, October 25, 2008 – The hotel had a breakfast, which was actually kind of crowded, but we enjoyed bagels and cereal before our morning swim.  Got on the road about noon, stopped around 1:30 for lunch in the car.  I had an avocado sandwich (good!) from Atlanta Bread, and the kids had Bojangles Chicken, which has really good fries.  Chicken is pretty good too.  Stopped at a Shell gas station around Spartanburg, South Carolina, where we were approached by a man who had “run out of gas”.  Luckily, he had plenty of jewelry on display inside his coat to sell, so hopefully he wouldn’t be stuck at the gas station for long.  Traffic got a little backed up near Asheville, and it was bumper-to-bumper, but for only about 10 or 15 mins.  We decided to get off of I-40 to enjoy the mountainous scenery since we’re not usually in the mountains when there’s daylight on our trips down south.  In the peak of autumn color-changing season at sunset, the mountains were nothing short of gorgeous, and we pulled over at a few scenic overlooks for observation and picture-taking.  We stopped at a wonderful little restaurant in the mountains of Eastern Tennessee called “BBQ Garden Cafe”, and I can’t say enough great things about the place.  The ribs and corn were the best of each that both my husband and I have ever had.  And that’s really saying a lot because we are tough critics when it comes to food at restaurants.  Unfortunately, as we chatted with the owner we learned that they were days away from closing – just not enough business in the mountains.  It’s a real shame too – best food I’ve had in a long time.  And it was a family owned place, so the owner got your order and went to grill it himself, and he even had his kids helping – a really nice family, and a really nice family atmosphere also.  I really hope that by some miracle the place doesn’t close – I was going to make sure we go back there every time we’re in Tennessee.  Here is the address, just in case you’re in the area; I can’t say enough how much I recommend the place.  You might want to call first though, since they did say they were closing down!  It’s located at: 3323 Cosby Hwy, Cosby, TN 37722

After the delicious dinner, we headed for home in Ohio, and we arrived at about 5 in the morning, a little early compared to usual.  But that’s ok, we needed the day for catch-up on sleep, laundry, unpacking, etc.  As you can see, I’ve been busy ever since which is why it took me a month to finish the trip diary.  But now I have, and all I have to do is cut and paste all 6 parts into one diary for our family to read for years to come.  Thanks for letting me share it with you; here is a picture of the autumn Smokies at sunset: 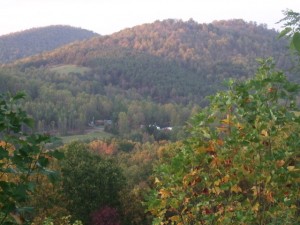