… but she thinks she is!  We used to have a cat, but she passed away last year.  We got our dog as a puppy just 4 months after we got the cat as a kitten, and they lived together for 10 years, so it’s no wonder my dog thinks she’s a cat.  Despite her old age, she will jump on the furniture, and even walk on the top of the couch – very cat-like behavior.  She is also more independent like a cat, and she’ll only come when called to snuggle if she wants to, like a cat.

The other day, she decided she was done waiting for the kids to eat their lunch.  We had left it out because the kids hadn’t eaten well, and we thought they could come back later and have a bite – WRONG!  Our dog Charity (the cat in disguise) took it upon herself to climb UP ON the dining room table and get their lunches.  She is our spoiled rotten baby; what were we going to do, yell at the old lady?  So we took a picture instead, note how she uses her feet to tip up the plates and hold them in place so they don’t slide away while she’s licking:

And Charity has such a personality; she hates being laughed at, so I think she learned her lesson.  Besides, once the motivation to get the food was gone (eaten), she was stuck up on the table.  We wrestled with the decision to help her down; she is 11 years old and I didn’t want her breaking bones or worse, but in the end she got herself down successfully.  First she kind of growled and grunted around up there while we giggled at her from the living room, then she used her new vantage point as a barking stool, but just as I got sick of it and went to help her down, she got down herself.  She is such a jerk but what a personality that dog has…  We love you Charity!

And now you need to see how cute she really is, one blue eye and all.  So here is one of my favorite pictures of her in a Chicago Cubs shirt – opening day is on Monday, so GO CUBBIES!!! 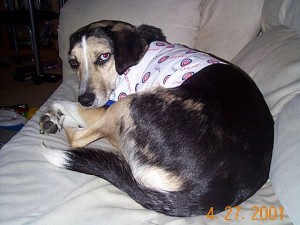