Thought I would post a quick little update about our youngest child who is growing so quickly that I don’t know if we can call him our “new addition” any longer!  Luke James is almost 2 months old, and among his likes are being held, listening to music, and looking at lights.  He’s been especially impressed by the colorful lights on the Christmas tree.  These things are common favorites among many almost-2-month-olds, but Luke is a very special baby – he has been able to hold his head up for a few weeks and is extremely alert for a baby his age.  His VERY FAVORITE thing to do in the whole world is to be held like this while his little hands open and close and his eyes bulge as he takes in the world around him: 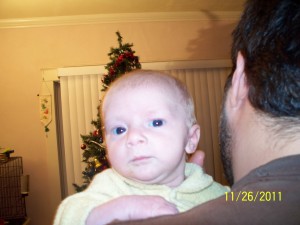 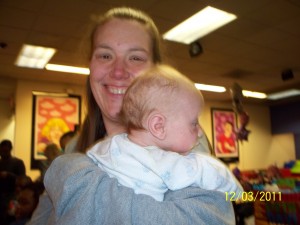 Luke doesn’t sleep well at night, but we aren’t really surprised because none of our 5 kids were very good sleepers as babies.  But Luke doesn’t sleep much during the day, either – he takes about one good nap per day about 3-4 days per week.  And by “good nap” I mean him sleeping for over an hour without waking up.  Actually, I thought of the perfect way to describe Luke the other day: he is an intense baby.  He wants what he wants when he wants it, and he’s not shy about asking.  Don’t get me wrong; it’s not that he is a disagreeable baby, and he is very smiley.  He’s just very demanding, and since he is always awake…  well, you can understand why my free time is down to almost none and the blog posts from me remain infrequent.  Especially because he demands to have 100% of the available attention, whether it’s eye contact while playing with him or using both hands to feed him – he is not a fan of a multi-tasking parent.

He’s already able to play – he loves looking into the eyes of people who play with him, and he especially likes to exchange baby talk with “goo” being his favorite word.  He loves when his sisters and brother play with him, but it’s hard to tell if he has a favorite yet.  Christopher is 3 and Luke’s only brother, but he doesn’t play with him often – it seems like Christopher is afraid of hurting Luke, and he also seems shy about talking to him or playing with him.  Disney likes to hold Luke (she’s 5), but she loses interest in a matter of minutes.  Taylor is almost 12, and she enjoys Luke’s cuteness, but she is too busy with a life of her own to spend a lot of time with her baby brother.  Sammie stands out as the remarkable sibling.  7-year-old Sammie just adores her baby brother; she’s always asking to hold him, and she doesn’t soon grow tired of it.  She plays with Luke, asks how he’s doing, expresses interest in his activities, misses him when she’s gone, and loves seeing cute pictures of him.  I’m looking forward to watching their special bond strengthen even further as they grow up together.  His brother and sisters love their baby brother in their own ways, and any time Luke does something new, he is crowded by an admiring entourage that can rival that of most celebrities. 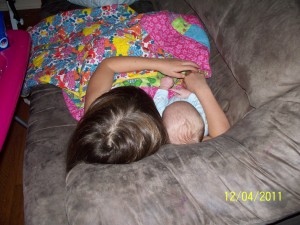 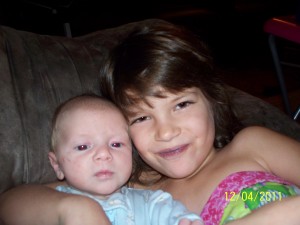 Luke also really likes baths.  He smiles like crazy the whole time he’s in the bath; he’ll even throw out a couple of “goo”s and “gaa”s and doesn’t seem to notice that he sounds different when his ears are under water.

Luke is also the tie-breaker in our family – we have 3 brown-eyed people and 3 blue-eyed people.  Two months old is too early to tell what color a baby’s eyes will be, so right now we don’t know which “side” will win.  It’s interesting also that our 2 blue-eyed kids are left-handed while our 2 brown-eyed kids are right-handed.  Will Luke be a tie-breaker in only the eye color category or will he break the mold and be a blue-eyed righty or a brown-eyed lefty?

Even with his intensity, Luke is a wonderful baby and it’s been nothing but a pleasure so far to get to know him as his personality develops – I wouldn’t change any part of him or anything about him, no matter how far behind on stay-at-home-mommy-work I am!  Here he is wearing the adorable camouflage hoodie someone got him – it’s so cute!  And here’s an interesting bit of culture clash for you – where I grew up in the suburbs of Chicago, Luke would wear this and we’d be trendy.  Here in the woods of rural Northwest Ohio, I put the camo hoodie on Luke, and we heard no fewer than FIVE comments about hunting and him being a little woodsman  🙂 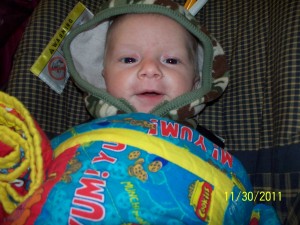