The title of this post is a quote from my favorite tv show, The Office.  Now I must go on a brief tangent to find out when this awesome show starts for the season – there it is, September 17, ugh, almost two months to go!  Time to add a countdown to the site…

Tangent over.  Anyway, in the tv show The Office, they have an annual awards show called The Dundies.  The lovable yet jerk of a boss, Michael Scott, gives (mostly silly) awards to his staff, and the workers generally are not thrilled about the Dundies.  A character named Oscar Martinez says the following about Michael and his Dundies:  “The Dundies are kind of like a kid’s birthday party, and you go, and there’s really nothing for you to do there, but the kid’s having a really good time, so you’re kind of there? That’s… that’s kind of what it’s like.” The reason I’m sharing the quote with you is because it floats through my mind every time I invite our family friends to one of my kids’ birthday parties.  I have 4 kids, one born in every season, so we have a birthday party around here every few months.  For the older ones, we invite their friends from school, and we invite family and a few of our adult friends to the parties for the younger ones.  I really hope no one is ever bored – it is, after all, a bunch of adults sitting around at a kid’s birthday party.  We don’t play “pin the tail on the donkey” or break a piñata; it’s just a reason for a bunch of us adults to get together, chat, and have some cake.  This is exactly what we did this past Sunday at my son’s first birthday party.  He had a really great time, and so did his sisters helping him open the presents.  He turned blue from his birthday cake, which he absolutely loved, of course! 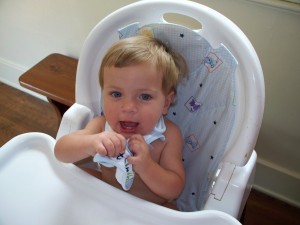 (his bib says “My 1st Birthday”, but he hated it and is trying to get it off in this picture) 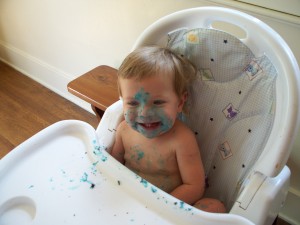 He also got lots  of great presents –  some adorable outfits and cool toys that actually kept him busy for more than 10 minutes!  He likes his new toys so much that he’s been playing with them non-stop!  They’ve actually kept him out of trouble – well, kind of, he did have two baths out of necessity already today and he spilled a glass of water all over my computer wires, but that’s nothing for him.

So thanks again to everyone who attended – he especially loved it when everyone sang ‘happy birthday’ to him!