The other day I got an email from my friend about an unusual request she had.  I found the email quite amusing, so I’ll share it:

Hi Lisa!  I have a big favor to ask.  Can I borrow Disney & Christopher for a photo?
It’s a long story — My grandson Ben colored a “Flat Stanley” – do you know about him?
Ben sent Flat Stanley to me, and I have to send him back along with a story of adventures Stanley had while he was here.  – This is a school project.
Well, I got it all done and ready to send back when I realized that Stanley didn’t really have any adventures – just played with the cat, went to imagination station, went to Walmart – pretty boring stuff.  And my grandson colored him as if he was a superhero!
So now I want to get him out of the envelope, come up with a superhero type adventure, and get one more photo before I send him back today.
If I can get a picture of the kids holding Stanley and cheering for his having saved their lives, it would make my day as well as Ben’s!
They don’t have to be cleaned up or in good clothes or anything – just everyday cute Disney & Christopher!
If this is ok with you, let me know when to come.  We can do it right there outside your house.
Thanks!
So my friend came over, and we posed the kids with Flat Stanley and even threw in the parrot to make his adventures more exotic.  Here is the result:
Dear Ben,
Thank you for sending Flat Stanley to stay with me for a few days.  We had a nice time together!
The first day, Stanley played with Peanut, and then after lunch took a nap with him.  Later, we went to Imagination Station where Stanley climbed everywhere, and took a tumble on the highest level!  That night, he slept in the bed in the guest room where your parents sleep when all of you come to visit.  He had plenty of room!
The second day, Stanley climbed a tree in my back yard.  He chased the squirrels up and down the trees, but they were much faster runners and tree climbers!
Later, we took a walk and had a real adventure!  We saw a baby who had fallen near the street, and his sister was crying because she couldn’t pick him up.  Suddenly, a huge brightly colored bird came swooping down toward the baby!
Stanley, being in his superhero costume, knew just what to do!  He jumped up and blocked the bird away from the baby, scooped him up and carried him to the steps of their house.  The sister was so happy that her little brother was ok, and their mother came running.  She was so grateful to Flat Stanley!
On the last day here, we went to Wal Mart to get these pictures developed.  I know Stanley had fun while he was here, but he was glad to be folded into his envelope for the trip back home.  I’ll bet you were glad to see him too!
Love, Grandma 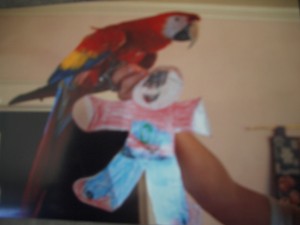 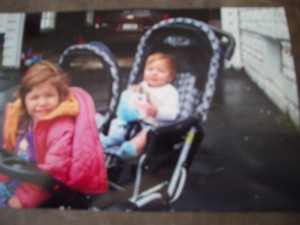 The picture quality isn’t very good because those are actually pictures of pictures – my friend gave me printed pictures, and I don’t know how to use our scanner.  Needless to say (before you call the child welfare people on me), much of the drama in the story was added for the purpose of Flat Stanley having had an adventure – he was dressed as a superhero, after all!  But I just got a big kick out of the entire episode and thought it would make for some cute blogging material.  I had heard of Flat Stanley before, how about you?  Any Flat Stanley adventures you’d like to share?

4 thoughts on “Flat Stanley To The Rescue!”