My first Christmas present of 2009 – Clue The Office Collector’s Edition! 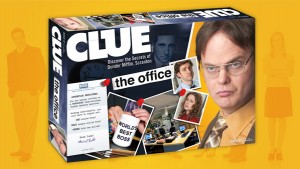 Ok, I have to be honest – could you tell I started the draft of this post weeks ago?  But I had to finish it, cuz this is a super-cool game given by a very thoughtful friend.  In addition, I received some other awesome gifts: Walmart gift cards and a gift certificate to the local pet store so I can get my parakeet – more on that later.  My gifts also included something incredibly touching and sentimental from my husband and kids, but that’s all I need to say about that to keep from traveling the dark road of sadness.

Back to Clue – The Office version – it was so fun!  In true keeping with Office traditions, the victim in the game is Toby Flenderson!  Obvious, especially when the game’s instructions were penned by Michael.  Each player chooses an available character, and they get a little Office ID card for their person (Office fans at our church exchanged this game for Christmas, and they replaced the little Office ID’s with pictures of church staff – hilarious!).  Players then move about the Office, entering rooms like Michael’s Office or Accounting, and play continues just like the other versions of the game Clue – you make accusations about who killed Toby with which weapon in which room.  My favorite part of this game (aside from the fact that I won the first round we played!) are the weapons –  pewter figures representing various hilarious Office plot lines; for example, a bike chain, a Dundie award, and my personal favorite: a George Foreman grill!!

It’s a must-have for any fan of The Office, to be especially appreciated by game collectors like myself!