During visits to the zoo, most kids will fantasize about which animal they would like to take home and have as a pet.  There are many reasons why exotic and wild animals should not be kept as pets, but being an animal lover, I guess I never grew out of the mindset of a kid at the zoo – I still think about which ones I would like as pets.  Well, actually, I’d like all of them as pets, but here are the top 10.  Since this is purely fantasy, of course I did not take rational things into consideration like cost or cleaning up after or housing the animals, where’s the fun in that?  While you’re at it, try putting your top few fantasy pets in the comments box below…  🙂

African Grey parrot – Ugh, another large bird?  Do I really want more bird screaming to rile up the kids?  But this is a fantasy list, so I’m going to build a huge tropical aviary with a little river for my birds, no problem.  Members of this particular breed of parrot are incredibly smart, and their ability for exact mimicry is hilarious!  I once posted a video of a little African Grey character named Silvia who did an awesome impression of Desi Arnaz (Lucy, you got some ‘splainin to do!) as well as sarcastically (and hilariously) delivering the line, “Well loddy-frickin’-dah!”

Manatee – My favorite animal; manatees are gentle and intelligent.  I find the manatee’s graceful movements relaxing and therapeutic.  Watching my manatee swim would be a great way to unwind after a stressful day!

Gorilla – Humans  have much in common with these intelligent primates.  It’d be incredible to get to know one on a personal basis.

Sea Horse – Well, these guys mate for life, so I’d like a pair of seahorses, which would then turn into hundreds 🙂  But many of their behaviors are truly fascinating to watch! 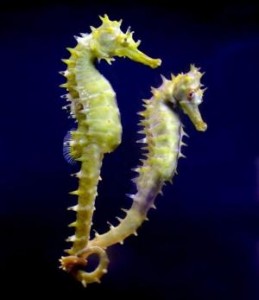 Sea Lion – Like an aquatic dog, sea lions are intelligent, trainable, and beautiful swimmers.  And so cute!

Goat – I’ve always loved goats; now that we live nearby many farms, this might be a possibility some day!

Huge Dog – Dogs are the greatest, and sometimes it seems like the larger the dog, the friendlier.  So for a dog-lover without limitations on house size, wouldn’t it be great to have a beautiful 150lb+ lap dog?  I was thinking St. Bernard, Great Dane or Mastiff type dogs.

Octopus –  A somewhat mysterious animal, though to be intelligent based in part upon its ability to manipulate items like jars and toys for food rewards.

Alligator – Huge reptiles with a bad rap; I would love the time to hand-raise and train a gator.

Tortoise – I really like tortoises, and it’d be really neat to create an exhibit to house one of those super-huge tortoises.

Marmoset – a cute furry little primate.  Cute as he is, smaller primates are known for being tempremental, so this guy is a runner-up. 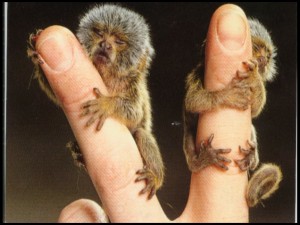 So there you have it.  My husband commented on my list’s lack of felines.  True, I always blog about how much I would like a cat, but in the real world, all that’s stopping me from getting a cat or two or ten is my cat allergy, so that’s not really the point of the list – it’s more about forbidden animals.  Big cats would be too scary to play with – I had a little cat who passed away, but after watching how suddenly and completely her moods could change, I gained a whole new respect for big cats, so no thanks!

6 thoughts on “Taylhis’ Most Wanted”