I saw this article in the news a few weeks ago and was reminded why  I will never take my kids to a circus:

INDIANAPOLIS — More than a dozen children were injured Saturday morning at the Indiana State Fairgrounds when a circus elephant they were waiting to ride got startled and caused some scaffolding to give way.

The scaffolding stairway leading people to the elephant ride collapsed just before 10 a.m. inside the Pepsi Coliseum where the Murat Shrine Circus is being held, said Indianapolis Fire Department spokeswoman Capt. Rita Reith.

At least 15 children between the ages of 8 and 12 years old were taken to first aid stations at the site, but most suffered only bumps and scrapes, Reith said. One adult suffered a minor arm injury when he or she fell from the top of the stairs.

It’s unclear what caused the elephant to become startled.

The circus continued as scheduled.

Well, first things first – thank goodness no one was seriously hurt.  And it’s not that I’m some crazy animal rights activist.  But I do believe in treating animals with respect.  And I don’t see how it’s possible to treat circus elephants with respect given their busy show schedule, the cruel training methods, and the high intellect noteworthy of the elephant.  Not only is the performance schedule strenuous, but the fact that such a huge animal is forced to travel from city to city on a train leaves no room for an argument that the animals are being treated with respect – in my opinion anyway.  In fact, given the conditions that circus elephants are continually forced to endure, I’m actually surprised that circus catastrophes don’t occur more often.

Zoos are another story;  zoo animals’ habitats try to mimic nature as closely as possible; they’re not exploited for the sake of making a few bucks (pony rides and things like that are different – as I said, elephants are highly intelligent and when you add in the traveling with the circus and the sharp stick used to prod them when they disobey…), but rather, zoos exist to help educate the public.  And if the general public is going to care enough about animals to want to help endangered species and to further conservation, zoos are a key factor in making this happen.  So that brings me to the following picture, which was in an email I was sent.  There is a zoo exhibit in Canada where you get to go in a pool adjacent to the polar bear exhibit; with only a pane of glass separating you from the polar bears (albeit a VERY thick pane of glass!).  It’s a great example of how zoos can capture and hold people’s attention about animals without harming the animal in the process.  Check it out – maybe I can see it live some day! 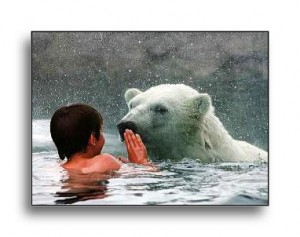 4 thoughts on “Elephants Are Not Toys”