On Thursday, my husband’s brilliant ability to find awesome entertainment deals on the internet paid off once again.  He booked us a VIP tour at King’s Island (click for a view of the rides and attractions!) near Cincinnati Ohio, and we spent the entire day at this awesome amusement park!  The VIP tour included our own personal guide; a park employee who followed us around all day leading us up the exits of every ride so that we got to bypass the line and ride without waiting – in the seat of our own choosing. We also got to wear lanyards with VIP passes on them (think of the movie Wayne’s World when Wayne and Garth get backstage passes to see Alice Cooper.  They wear them around their necks and proudly display their lanyards, flashing them into the faces of nearly everyone they encounter, hilarious!) – and tempting to reenact, but there were some people in line who were upset that we got to board without waiting in line; I wouldn’t want to rub it in.  But I would recommend the VIP tour to anyone who wants to go to King’s Island  – it includes a guide (you can even make him do things, like hold your stuff and go on rides, haha!), no lines (sometimes a minimal 5 minute wait at the gate while the ride operators find a place to stick you in, not really an issue at all – there is plenty to watch for those 5 minutes), an all-you-can-eat buffet for lunch, unlimited fountain drinks throughout the day, ice cream, a backstage tour of The Beast (the longest wooden roller coaster in the world!), and 2 ride pictures.  A great deal, especially if you want to sit through my following narrative to see if it’s a place you’d want to visit:

The lady on the phone told us to get to the park at 8:30 am, so we were actually early and had to wait in a car line to get in.  When we got to the park, we got shuffled around and had to wait a bit more – it seems that this part of the tour could be tweaked a little bit.  We didn’t get our guide and get on rides until about 9:45.  Still early (park opens to the general public at 10), but we had about an extra hour of doing nothing at the park (could have slept an hour longer!), so perhaps they should tweak this part of the tour to make it run more smoothly for the guest – everything else about the tour is really great though!  So anyway, our guide comes to meet us, and we gave him our list of rides and follow him around the park.  Actually, since it was before 10, only the park’s brand new showcase ride and The Beast were open.  So we began with the Diamondback – which I had named as the ride that scared me the most on the way over.  But I loved it!  It was so smooth and all those fast drops were so fun in the cool open air.  The Beast was another story.  I liked it, but it was very rattly and jerky.  Going back on The Beast later in the day and sitting in the front row changed the experience for me, however, and we ended up riding it a lot!  Once we discovered the front car of The Beast and I switched sides of the train with hubby, I enjoyed the ride immensely.  It’s a 4 minute, 50 second ride through the forest on a wooden roller coaster at speeds of over 60 mph.  The subtle sound of chirping birds accompanied by the naturalistic scents of the surrounding forest and the wooden tunnels where the coaster whizzes is indescribable.  A comment on themeparkinsider.com says about The Beast, “Running through the thick forest at 65 mph on an intense wooden coaster…about as close to riding a real beast as you can get. Classic ride that always delivers.” – I have to agree.  They built another wooden coaster at King’s Island called Son of the Beast, but it closed in June when people complained it was too rough.  From the printed King’s Island info, I learned that Son of the Beast was a looping wooden coaster – interesting.  Oh well, maybe it’ll open some day for me to try.  But back to the backstage tour of The Beast – very cool.  We watched some trains descend the first large drop which actually leads directly underground into a tunnel.  We walked further into the forest (noticed some long-gone riders’ possessions along the way: broken sunglasses, coins, hats, etc.  Didn’t see any cell phones, but then again, we saw the lost cell phone display they have in the Diamondback area – a big clear box FULL of cell phones, ipods, Blackberries, PDAs, etc. ), and we learned some interesting facts while watching riders fly past us – and boy, were they surprised to see us walking around back there in the forest!! As for the facts – the entire coaster was built from scratch on site; unlike many of today’s coasters which are shipped into the parks in segments.  The Beast was built around and including the existing rolling terrain of the Miami River valley in lower Ohio, and as I mentioned, it goes underground.  It has speed monitors built into parts of the track, so if a train is going to fast, it will automatically break to slow itself down.  I gratefully noticed this while riding, and it helped calm my concerns of flying off the track.  This coaster goes so fast into those tunnels – WOW!  For all these reasons and more, it’s a coaster like NO other!  Here’s a pic – looks like something I’ll have to try in the fall; the forest looks beautiful during peak season for color-changing leaves: 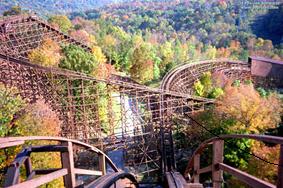 Ironically, the exact opposite thing happened with the Diamondback –  I loved it the first time, and then I tried the front row which was absolutely terrifying!  I  won’t be riding the front of the Diamondback again.  Careening down that  first 74° drop (!) practically face-down at over 80 mph with only a red thing between my legs to keep me from plummeting to the earth made me feel like I was going to die for sure. 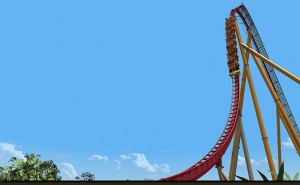 And not in a good way, which is ironically enough sometimes the reason why lots of crazy people like to ride coasters.  Being in the front seat on Diamondback makes it look like the the track disappears beneath you, then before you know it, you’re flying in the air getting lift out of your seat and you have nothing on either side nor in front of you – yikes!  I’ve grown too old to feel invincible, so I put a cap on my thrill-seeking.  I enjoy a good coaster, but I also have my limits.  If you are a thrill-seeker roller coaster enthusiast who just can’t get enough, try the front car on Diamondback!  And a side note, the guy who gave us the behind the scenes tour of The Beast is the guy who thought of the name for Diamondback; it was an interesting experience to have something like that come up during a conversation.

I think I’ll stop there for now…  it was a big day, and I’d like to write up more and get more pictures up – and yes, I  do have those free ride pictures we got of Chris and I on The Beast and Diamondback.  Am I willing to post them on the internet?  Maybe you’ll have to read my other King’s Island posts to find out!