I am behind on blogging about my favorite tv show (and the only one that’s left that is good enough for me to watch these days!), The Office!  Time flew so fast that the season premiere was a few weeks ago now, and it’s been a great season so far!

The Office is on Season 7 already, and unfortunately for us fans, this is reportedly the last season for the show’s lead actor, Steve Carell.  As a huge fan of the show, I  personally don’t see how it will work without Carell’s lovable idiot boss character, Michael Scott, and I’m hoping that he will change his mind about leaving.  Although he has yet to win an Emmy for his performance as Michael Scott (darn Alec Baldwin on 30 Rock takes it every year!), episode 2 of season 7 of The Office saw the best performance I’ve ever seen Carell give and probably the best acting I’ve ever seen on a tv sitcom!  If you’re a fan, I’m talking about the scene where he is in a counseling session with Toby, and Toby is kind of manipulating him to actually talk to him.  For a few minutes, Michael is actually talking and playing cards with Toby – a man he simply cannot stand.  He even has an “I loathe Toby” face that is priceless.  So anyway, he’s playing cards with Toby, and Toby is actually making some valuable psychiatric headway with Michael…  until Michael realizes it.  Within seconds as he’s realizing what Toby has done, his transformation back into his “I loathe Toby” mode is just…  WOW.  Emmy-worthy material, for sure in my opinion, but only time will tell.

Unfortunately, if you are not already watching this great show, then I can’t recommend you start now in the 7th season – nowadays the show seems to be written for its fan base, and newcomers might not be able to follow the plots which are seemingly being developed around the already established characters.  But I do highly recommend you check out the show beginning in Season 1 – you can do this on dvd or perhaps even on NBC’s website?  That way, you can watch the The Office characters hilariously evolve yourself.  If you work in an office yourself, are looking for a new tv show to watch, or are simply a fan of good tv, talented script-writing, try The Office!!

I cannot wait to see what the 3rd episode of this new season will bring us on Thursday!!

One of the Michael Scott’s (aka Steve Carell’s) famous “I loathe Toby” faces: 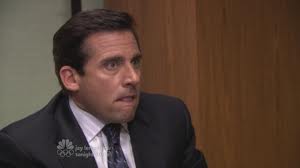