So, where did I leave off when I blogged about our kid-less day trip to King’s Island amusement park?  I don’t remember; I got kind of side-tracked and have made a few unrelated blog posts since then…  But no matter, I’ll just begin by rating the rides at King’s Island; my scale is 1-5 ♦’s, 1 being not so good and 5 being a perfect ride experience.

The Beast – 4½♦.  I have an in-depth description of this one in my previous post, but I will recap again – very cool wooden roller coaster; built into the existing terrain of the Miami River valley in southern Ohio which means you can be speeding along not more than 3 feet above the ground, thinking you must travel a lift before you can drop, but that’s not the case!  This is the longest wooden roller coaster in the world with a 4 minute and 50 second ride time.  Like any wooden coaster, it can be rough and rickety (I was sure I threw out my bad back on one of the speeding curves, but thankfully, I did not.  Shhh, don’t tell anyone I ride coasters with a bad back, but it must not be that bad since my back was one of my least sore parts the day after King’s Island), but these sensations improve if you ride the front row – I HIGHLY recommend the front seats on this one!

Diamondback – 4½♦ – I also talked about the park’s newest addition in my previous post, so here is another recap.  Exceptionally smooth ride, with no upside-down air time.  Rather, the only air time is achieved when your butt lifts from your seat on the multiple drops.  The sensation of free-falling is achieved by the restraint system – one smallish plastic piece that sits between your legs – that’s it!  The picture I posted in my previous blog doesn’t do justice to the coaster, so here is another: 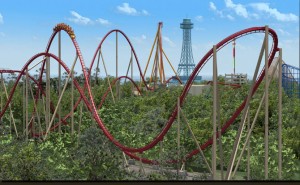 I know certain readers of mine will notice that this is indeed a computer-generated picture, so I might as well just say that outright.  The first time we went on Diamondback, I loved it, and it would have gotten an even higher rating from me if it were not for the time we rode it in the front row.  Unlike The Beast, the front row of the Diamondback adds an entire new dimension to the ride – one I was happy enough without!  I respect our tour guide’s opinion that riding front on Diamondback is a must-do experience, and even though it wasn’t for me, I’m glad I got to do it once.  But it was SOOOO scary!

Firehawk – Holy (excuse my language) crap.  This is one doozy of a coaster!!!  Wow, I forgot to rate it, hmmm let me think…  3¾♦.  First let me explain what this coaster is, and then I can explain what would have made it better.  The riders load into Firehawk, and then the seats recline until the rider is lying down.  Not for the faint of heart – you are strapped into flexible (not hard plastic like most) shoulder harnesses, and then you are tilted backward until you are lying on your back – and it even  feels like your head might just be lower than your feet.  So anyway, lying down, the rider leaves the station, and proceeds to go up a hill, head first, facing the sky.  So of course you can’t see when you’re going to reach the top.  And when you finally do reach the top of the lift, you flip until you’re flying Superman-style through the trek of the coaster.  Overall, it was awesome, and I have to say  that I truly misjudged how ultimately different the horizontal sensation would be – it was VERY different.  What kept me from giving this coaster a higher rating, however, was this (and a discussion on the long ride home found my husband thinking the same thing):  For a unique roller coaster where you were supposed to feel like you were flying, especially for one of the first and only of this type (this is the only one in Ohio, I believe), they really could and should have simplified the design.  Instead of all the inversions, corkscrews and loops, they should have actually slowed down the coaster and left the rider suspended belly-down for the majority of the ride.  After people experienced that, THEN they could have added the speed and all the inversion stuff in an update version of the ride, and it would have been like a 2-fer – 2 rides, one idea.  The way it was, the ride was so fast that you really didn’t have the time to pretend to be Superman, and that was a shame.  The woman in our row the second time we rode Firehawk was, and I quote, “terrified”.  My husband told her it wasn’t that bad, and when he told her that, I was thinking, “What are you thinking?  It IS terrifying!”.  I just did not think that being on our backs face up on our way up the lift was the right time to tell a stranger that my opinion differed from my husband’s – it’s not like she could check my face for my true feelings.  The woman found out for herself.  I think she liked it though, as did I in the end, despite the changes I would make.  Another fun thing about this coaster is that while waiting in line (or by-passing the line on your VIP tour, highly recommended please see my first King’s Island post ), you get to pass next to the part of the ride where it first slows down as the riders come back into the station.  You can hear the riders’ very first reactions to the crazy configuration of this coaster, and that is a really cool time-filler!

Flight of Fear – 3¾♦.  It does feel strange to rate this and the previous coaster the same since they are two very  different ride experiences, so I feel the need to disclaim that I’m rating my overall ride experience.  Keep in mind that I am no longer in my 20’s, so I’ve lost my reckless abandonment.  I really like roller coasters, but I do draw the line and find some things too scary – so my rating system might vary from that of a true coaster enthusiast.  But anyway, I liked Flight of Fear, largely because it is like a much better version of Disney’s Space Mountain.  My husband likened it to the Aerosmith Rock N Roller Coaster at Disney’s MGM Hollywood Studios – which I loved, but I  found it more like a much improved Space Mountain.  All 3 are dark indoor coasters.  Flight of Fear and Aerosmith have what they call linear induction launches, which is how smart people say “0-54mph in 4 seconds!”.  On the way home, I was browsing through (ahh, life without kids in the car!) the super-cool stat sheets our guide gave us as parting gifts, and I noted that Flight of Fear was the first ride in the world with the linear induction launch!  It was SO much cooler than Space Mountain; much more smooth and with inversions.  Space Mountain is herky-jerky, and there are no drops nor inversions – it’s almost kind of like, what’s the point?  THIS is Magic Kingdom’s thrill ride?  But then again, Magic Kingdom really isn’t like that – you visit with small children and/or for the small child inside yourself.  But my point is, Flight of Fear is SO much better than Space Mountain, but not quite as good as the Aerosmith coaster – perhaps something to do with Aerosmith’s black light flourescent graphics versus the plain darkness of Flight of Fear; I preferred the graphics.  For a tangent, here is an interesting story about Flight of Fear: as I mentioned, we had a guide for our trip to this park.  Other park visitors would see he was an employee and ask him questions throughout the day.  One of the questions was “Is Flight of Fear still open?”.  Our guide said yes, not really knowing what the guest was talking about until later during the behind-the-scenes tour of The Beast when the park’s PR Manager, Don Helbig (who has ridden The Racer, another wooden coaster, almost 12,000 times!  How does one even count that high, especially when being tossed around on a wooden coaster?) told us that one of his job’s challenges was to dispel the rumors about the park given life by the internet.  One of those rumors he talked about happened to be that Flight of Fear met its demise.  Not true – Flight of Fear is alive and well and also well worth riding, especially if you are a person who is used to Space Mountain.  I think I can pretty much guarantee you will like Flight of Fear better.

Well…  I have once again talked blogged your ear (?) off with my boring detailed account of an event.  I wanted to rate most of the enjoyable rides at King’s Island, but I must cut the post short for now – maybe I will be able to get the other cool rides in the next post if I cool it a little and shorten the detail…  Until then…