We were all over the place this past weekend.  I guess it was the nice weather…  wait, it rained Saturday!

It started with game night on Friday night – my intentions were to take it easy and end somewhat early so we could rest up for a big day with the kids on Saturday.  It didn’t end up that way – we began the weekend by staying up too late!  But it was a fun game night, kind of a different crowd, so it was interesting to mix it up a little.  Our new friend brought presents for the kids to game night, and I can’t express enough gratitude – she basically saved game night!  Our will-be-5-yr-old-tomorrow Sammie was in a mood, and seeing the new friend (the presents didn’t hurt either!) actually got her out of the mood she would have otherwise stayed in all night probably – thanks Mary!

Saturday we were going to take the kids to the Binder Park Zoo in Battle Creek, Michigan.  My husband and I (and Taylor in her fetal days) went there in ’99, and we loved the zoo.  We found out it was only about an hour and a half drive from here, so we decided to check it out.  An hour and a half drive doesn’t seem like a long time if there’s no traffic and the kids are good!  Besides, an hour and half drive home after a busy day can sometimes (if we’re lucky) cinch the deal and put all 4 of them asleep for the night.  Well, anyway, it was raining on Saturday.  And we didn’t want to take 4 kids through an unfamiliar zoo in the rain.  So we ended up at Crazy Pinz in Fort Wayne, Indiana.  It’s a place where they have arcade games, bowling, mini-bowling, mini-golf and the kids’ favorite, Ball-O-City – a giant play area with levels and tunnels and balls to shoot at each other.  I was really happy when my husband pointed out the Chicago Cubs game playing on the huge tv in the bar.  So I stood over there and watched the Cubs wriggle out of a dicey situation – they had been winning 4-0 when all of a sudden, Houston scores 4 in the 9th and ties it up!  They also had bases loaded, but the Cubs got out of it somehow and came back with a win in the bottom of a 9th!  The bar at Crazy Pinz erupted in a cheer – Cubs fans everywhere!  So we stayed there for awhile and then got home late but not too late for us to catch up on watching the season finales of our two favorite tv shows – Lost and The Office.

I guess I should save it for another post, so let’s just say we were really happy with the finales of BOTH shows.  Lost actually answered a lot of questions that were outstanding, and it can finally be seen how events are starting to come full circle for the characters.  Something awesome occurred on the Office, well, it was alluded to anyway, but I think it was obvious what the next development is for the Pam and Jim characters.  Ahem.

Sunday after church we decided to reclaim our Saturday plans and head up to Battle Creek to Binder Park Zoo.  Sunday was a gorgeous, picture-perfect day weather-wise, and it ended up being a great decision – it would not be fun to tour this zoo in the rain with 4 little kids.  The zoo is mostly outdoor, and there is a bit of walking if you want to see the majority of the zoo.  You climb aboard a (free) zoo tram that takes you 5 minutes into the wilderness, err Wild Africa as the zoo calls it.  But whether it’s the wilds of Michigan or the savannas of Africa, the view that awaits you when you arrive in Binder Park’s Africa is breathtaking.  Beyond the authentic-seeming African village is a wall, and beyond the wall: 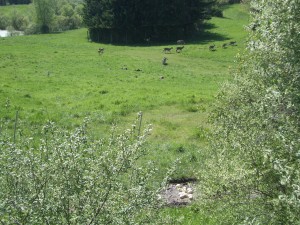 Click the picture to see a larger version – those are zebras and Thomson’s Gazelles grazing in the huge pasture.  And a clutch of ostrich eggs (real?) on the edge of the exhibit (lower right middle of picture).  The giraffes can go out there too, but they are usually over here: 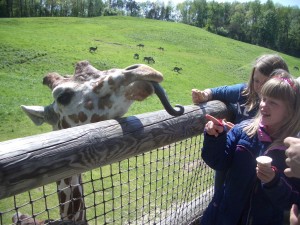 where you can FEED them!  It was a great day at a great zoo, and we even saw an animal I had never heard of – the Patagonian Mara.  Fully grown they are about 35-40 lbs. (the one here at Binder Park is 9 mos. old and about half that), and they are rodents most closely related guinea pigs.  At Binder Park, the keeper was in the cage with the mara, and she was jumping onto his leg and doing tricks for food – very cool.  I didn’t get the best picture; there was a tree in the way – again click for a larger pic, maybe you can actually see the mara: 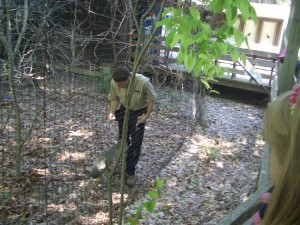 The Binder Park Zoo also has a cute rabbit exhibit where the kids can crawl through a tunnel and end up “in” with the rabbits, a cool children’s zoo (housing the happiest Guinea pigs I’ve ever seen – the first time I’ve seen Guinea pigs that weren’t squealing with fright or freaking out), and a carousel, among other fun things.  Here is my son on his first carousel ride: 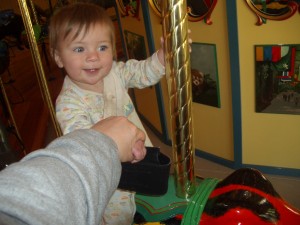 And two of my 4 happy kids at the zoo: 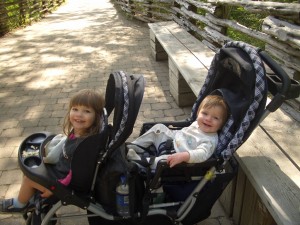 And my other two riding a giant ant: 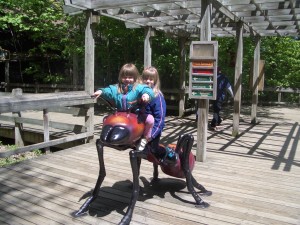 So…  a great weekend, even if we were never home sweet home.  I was going to share my pastor’s story he told on Sunday, but this post is long enough, that will have to wait for another post!  Until then…