Sunday, March 22 – Learning from our mistake the previous day, we decided to eat breakfast in the room, and it was much less expensive, we had plenty of room, and we didn’t have to worry about the kids disturbing anyone.  After breakfast, we headed to the city again, even though we were all kind of sick of it at that point.  But when I had heard that we’d be going to New York, the top site to see on my list was the World Trade Center site.  So even though we were sick of the commute to the city and searching for buses, we headed out to see Ground Zero.  We caught another bus tour, but this one was “hop on, hop off”, meaning you could get off at any of the stops, unlike the bus tour we had taken the night before.  But in New York city traffic, we still ended up being on the bus for about an hour, much to the kids’ dismay since they were starting to find the bus tours boring.  But 3/4 of the kids took a nap (and hubby too!), which left me and Jamy to listen (and giggle) at the tour guide – a very hyper Asian woman with a very thick accent.  She was very informative (when we could understand her, of course), but she would interject between her touring tidbits with concerns she had about the traffic – at one point she talked (nicely) to another bus, telling it we were there first and not to hit us.  Another time, a man boarded the bus who was selling water and popcorn, and she felt the need to tell us, “this is not a movie theater”.  Duh.

Anyway, we arrived at Ground Zero, but I think I’m going to do a separate post on that experience – it really was mind-blowing.

We left the Trade Center site and went into the World Financial Center – a beautiful building where people were very nice and gave us detailed directions about how to get to the ferry without using the famous New York grunt n’ gesture.  The best news is that we weren’t going to have to take a Waterways bus!  Seems the ferry came right over to the financial district – YAY!  On the way to the river, we found some gelato to buy in the financial center.  Gelato is a type of Italian ice cream handmade on the spot, and it is incredible.  I had trouble deciding on just 3 flavors, but I chose well: cookie dough, pistachio, and raspberry.  They were all delicious, but the raspberry was especially amazing.  For those of you who know me, you will be shocked to learn that I like gelato even more than I like Dippin’ Dots – that is how good it is!

So we made our way to the riverfront, and when we got to the ferry station, it was closed.  Honestly, you’d think that at least 1 of the 5 or more people who had given us directions would have known this, but I guess not.  And I don’t think they were playing a trick on us because unlike the grunt n’ gesture-ers, they were really nice – I think they just genuinely didn’t know.  So here we were again.  Stuck in New York with no Waterways bus to be found.  My husband was very smart when he read the fine print on the Waterways card we had that said Waterways buses would stop at any city bus stop on a Waterways route, so all we had to do was find one of those.  We asked some not-so-friendly construction workers, who  said that there were NO city bus stops on the entire street we were on.  So we used the map on the Waterways card, and we went a few blocks this way and a few blocks that way, and we found a city bus stop which we thought was on a Waterways route…  Unfortunately the only way to check if we were right was to sit and wait for a bus that might never come, but lo and behold, there was another Waterways bus, and my husband again jumped in front of it while we quickly scooped up all the kids before the driver changed his mind.  We were really getting the hang of this now, but that was our last Waterways bus, thank goodness!  Here is a picture of our 8-month-old’s ET impression – Manny Jamy was the lucky baby-wearer since my back never would have tolerated it all day and we wanted to leave my husband open for our clingy 2-year-old: 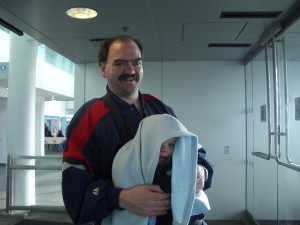 We got back to the hotel which is where we had left our car, and my husband used their Wi-Fi to find us a hotel in Pittsburgh.  We were having such a good time that we figured we’d extend the trip a little and make one more zoo stop.  The only problem is, we didn’t make it to our Pittsburgh hotel until 3 in the morning due to a 2 hour stop at Houlihan’s for dinner!  Why diid it take so long?  We were kind of a large party, and the place was mobbed.  Add in 2 poopie diapers and a bathroom full of drunks, and well, you do the math.  Some guy stopped on his way to the bar to gush over the baby, and while he was doing that, his girlfriend took a nasty spill up the bar stairs, glass (already empty, of course) flying out of her hand and everything.  Instead of trying to get up, she just lay there, probably because she was so drunk (she wasn’t hurt; I saw her later and she was fine), and her equally drunk boyfriend didn’t even notice all of this.  So I said, “Is she ok?” and when he turned to look, I fled with the baby.  Interesting experience, but one that makes me even more thankful for home sweet home  – we never have those kinds of crowds in our restaurants!  Like I said, we got to our Pittsburgh hotel about 3 in the morning, and we had kids who didn’t want to go back to sleep.  But we finally got them down, and we got a few hours of shut-eye before it was time to get up and add a new zoo to my list!