Tuesday January 18 – We began the day  at Sizzler’s breakfast buffet, again.  If you are noticing a pattern, you won’t be surprised to see this in the diary for pretty much every day of the week.  The prices there were great ($3.99 per adult and kids were free!), the food wasn’t bad, and it left our group full enough to sustain us until mid-afternoon, which saved us a lot of money.  Today was Epcot day, and it was a great day – the sun finally came out, and the temp was in the low 70s.  We rode the usual favorites, and we got to take our daughter Disney on my favorite Epcot ride Soarin’ for the first time because she was finally tall enough – and she liked it!  Epcot has a World Showcase which is an area set up like different countries, so we took the ferry to Germany and walked to Japan for their delicious snow cones.  We walked around the lake through Morocco and Italy, and stopped in Norway and Mexico for their boat rides which are very cool.  Someday I would like to visit the countries in Epcot, sampling the ethnic foods as I go – but that’s more of a retirement plan since the kids would never go for that now!  Oh, and we ran into Stitch in America! 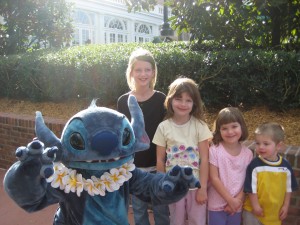 After the day at Epcot, we sent the little ones home with Grandma, and Hubby, Jamy and I attempted to find a good place to eat dinner, but to our surprise, there weren’t many good dinner choices left at 10pm, even in Orlando.  We ended up at Perkins – famished – and they were out of most everything I asked for.  I stomached the sandwich I got, which wasn’t very good, and Hubby was not too happy with his salad.  We did end up with a box of Eclairs to go, and those were pretty good  – well, what little of them we had anyway once the kids got a hold of them.  Our friend Derek arrived that night while we were sleeping, so our next day would see one more joining our group…

Wednesday January 19 – Breakfast at Sizzler (did you think I was exaggerating about eating there every day?), then on to the Magic Kingdom where we spent a fun-filled day.  We learned that there is an expansion planned and under construction to double the size of Fantasyland, so we are looking forward to seeing that on a future visit.  Splashwater Falls was undergoing maintenance (usually does in January when we go, but this is a small price to pay for ideal weather and low crowds  – BEST time to visit Orlando!!), but we enjoyed the classics like Big Thunder Mountain Railroad (and little Disney liked this one, even though it is a roller coaster!), Jungle Cruise, Haunted Mansion, Pirates of the Caribbean, and Hubby’s and my personal favorite that many others find to be lame,  The Carousel of Progress.  We skipped out on Space Mountain this time, mainly because the kids wouldn’t have liked it, and we don’t find that its long wait it worth it for a herky-jerky outdated roller coaster.  If you are into indoor roller coasters in the dark, I’ve always liked the Aerosmith one at Disney’s MGM, er, Hollywood Studios, although  we never find that park worth the time for a visit since there isn’t much there.  And King’s Island in Mason Ohio outside of Cincinnati has a SUPER dark coaster called Flight of Fear.  But back in Orlando, the People Mover ride in the Magic Kingdom, an elevated train-type ride that goes all around Tomorrowland, treated us to a one-of-a-kind glimpse inside Space Mountain – with the lights on!!  The People Mover travels into the Space Mountain building, but usually you can only see the glowing streaks of the ride trains as they zip past.  Because of a ride malfunction, the lights in the building were on, so we got an insider’s view of all the tracks and trains which was pretty cool!!  After the Magic Kingdom, Derek, Chris and I took the two oldest kids to Fun Spot to try the extreme go-karts, but it didn’t go over so well.  The oldest hated them, and she made me go putt-putt-putt all the way up the spiral and around the track – that was not fun; I’m more pedal-to-the-metal!  But we all took a spin on the bumper cars, and that was some great old-fashioned family fun that everyone was able to enjoy. 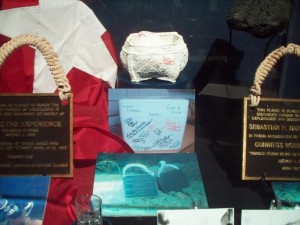 Interesting as it may be, it is a sad representation of what will happen to the remains of the luxury liner itself.  Scientists estimate that it won’t last more than 50 additional years if people don’t find a way to salvage it and bring it up for study.

After Titanic, we stopped at Dippin’ Dots, but it was our only taste of the delicious ice creamish treat for this trip, and I was SO disappointed to find out they discontinued my favorite flavor of Dippin’ Dots:  Root Beer Float.  🙁