Friday January 14 – We left our hometown about 4:40pm after loading the car, getting kids’ school stuff stashed for the week off, the gas tank filled up, and some snacks from the drive-thru for the kids.  I noted the dashboard temp at 20°F.  Around 8pm, we found a Goldstar Chili to stop at in Westchester, a suburb of Cincinnati – we love to stop for Cincy chili and coneys!  We took about an hour there, giving the little ones some time to run off some steam since there weren’t many people there that time of night.  Luckily we asked first and that’s how we learned that the McDonald’s Playland across the street had been removed – otherwise we would have taken 4 kids into the Playplace-shaped McDonald’s and had much disappointment to contend with.  Dinner went well, despite the waitress’ well-meaning attempt to reward our cute kids with balloons – helium balloons.  Really, lady?  4 helium balloons to add to the 6 people and the 6 people’s week’s worth of luggage in the mini-van about to trek 1000 miles?  So we managed to sneak out of the restaurant with only 2 balloons, and one popped right after we got on the expressway – thankfully it wasn’t too distracting to driver Hubby or we would have all been in trouble.  That last balloon made it all the way down to Florida with us, and it bopped around our rental house for the rest of the week until I “forgot” to pack it for the trip home.  After the Goldstar stop, the kids bedded down for the night, and they were all out by 10:30 – not bad, not bad at all!!  I had such a great time talking with Hubby and keeping him company as we drove down the country together that I didn’t want to go to bed, but I made myself try for some shut-eye around 2:30am.  I do really like the schedule we’ve made for these long drives to Florida, but there is just one downside – the most beautiful part of our trip, the winding drives through the breathtaking Tennessee mountains, is always done during the night when we cannot see anything outside but the lights of the towns in the valleys far below.  Hubby (and me) arrive in Florida tired, but the kids are well rested, and this is a way to break up the monotony of a 20+ hour car ride for those kids.

Saturday January 15 – We all woke up around 6:30am when we stopped for gas; I can’t remember where we were.  But the kids were in good moods, and the sunrise was beautiful.  Since the south was just coming out of a cold snap at this time, the air had an odd smell to it – a hard-to-describe tropical-climate-frozen-over kind of smell.  The kids awoke in wonderful moods, and we ate up all the miles we could until we began to get hungry for breakfast.  We decided to stop first for breakfast and then head to the beach since we had made the extra 90 minute jaunt over to the coast to visit while we were in the area.  We chose St. Augustine Florida since it’s coastal, and I had been there as a kid and kind of wanted to see it again.  But when we got off the expressway, there was no place for a family breakfast.  The Shoney’s that was on the roadside attraction sign had turned into a Chinese buffet, and even if we decided to stomach Chinese food for breakfast, they were not open at 8 in the morning.  So we headed east to the coast, and we found St. Augustine to be somewhat of a ghost town.  There were shuttered buildings and for lease signs everywhere; it was sad.  There seemed to be 2 sections to the city, however, and while the one section was full of shuttered attractions, empty storefronts and loiterers, the ‘original’ part of St. Augustine was bustling and beautiful.  Hoards of people were walking around the streets near the quaint shops, and we found our first glimpse of the ocean beyond the Castillo de San Marcos.  We weren’t able to stay long since everyone was starving and St. Augustine does not seem to have any family-type restaurants (mostly seafood and steak here), but we did get to glimpse some of the oldest city in the United States and marvel at the narrow streets as we tried to find our way out.  We got back on I-95 and exited miles south; near Palm Bay, I think – everyone was SO hungry at this point I wasn’t paying much attention to where we were, just that there was food nearby.  The Golden Corral here was excellent and satisfied our hunger pangs quite well.  And I have to  note how incredibly amazing those hungry, tired kid behaved!!!  All they wanted was to get to the beach, and they were SO hungry, but they were SO patient while we looked for food  – unbelievable!!  Next it was time to find a beach, so we drove east and found a nice place where we had been before.  It’s a minimal $2 toll to get over a bridge and to the coast, but well worth it since there is ample parking and shelters with bathrooms and showerheads to get the sand off. 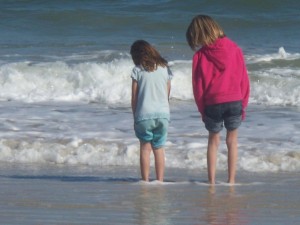 We had a great time at the beach, even if it was cold (I think in the 50s – I’m writing this so long after it’s hard to remember!) and the locals were walking along the coastline wearing hats and gloves while we were wading.  The kids LOVED the beach, but we got cold and very tired since we were on minimal sleep, so we threw everyone into the car; most of the kids were half-dressed.  At this point, all we wanted to do was get to our rental house in Orlando, and we were so excited when we spotted Orlando’s familiar landmarks along the I-4 corridor.  But we had one stop to make – Downtown Disney to check how many Disney World tickets we had left – you can’t do this over the phone anymore.  Downtown Disney was MOBBED and we were a bit discouraged, but then again, we go through this every time we take a trip to Florida- we think it’s crowded down there, but everything ends up ok.  This year was quite crowded comparatively, so we asked a Disney cast member, and they summed  it up in one word, “Brazilians.”  After she said that, looking around, there were a lot of Brazilians, I guess because in January it’s their summer vacation since they are in the southern hemisphere.  But anyway, my husband was walking around Downtown Disney, trying to find our ticket info, and things had been so crazy when we dropped him off, that he got out of the car without his shoes (remember he was on 0 hours of sleep!).  So he’s walking around Downtown Disney, confused, shoeless, and smelling like the ocean – people are staring, some are laughing.  Then he realizes – his toenails are painted!!  He had promised our 6 year old a week before that if she was good about getting up and going to school in the morning for a whole week, she could paint Daddy’s toenails.  We and some random strangers had a good laugh about that.

We left Downtown Disney, and we were SO anxious to get to the house we made a beeline straight for it except for one problem  – we were an hour early for check-in.  So we headed back to the tourist area (Irlo Bronson Highway), and we looked for some timeshare presentations to sign up for.  Don’t get me wrong, it’s not that we  like to do timeshare presentations, but we’ve gotten great at saying no, and Hubby and I used to make little games we’d play (insert funny random word in the conversation, things like that) that would make the 2-3 hours fly by.  Plus they would feed you and pay you for your time, so we recovered some of our vacation expenses that way.  Little did we know that the Orlando vacation scene is changing – timeshare presentations are no longer a dime a dozen;  in fact, we never found one that paid enough to be worth our time.

So we’re trying to kill an hour before we could get to the house, and we make a stop at the gift shop when we realize that most of the kids are not even dressed.  So I open the back of the van, and everything that we had just haphazardly thrown in the back when we left the beach tumbles out – including our bag of collected seashells.  So I’m picking up the seashells from the parking lot, one by one, and since I was half asleep, I didn’t really notice what I was doing until I heard, “Uh, Mom…”  I look in my hand, and I had picked up a couple of someone’s old discarded cigarette butts!!  Having had barely any sleep, I lost it then, and I laughed with the kids until I cried.

We pulled ourselves together and made it back to the house, which was finally ready – YAY!!!  Hubby took the kids in the pool while I unloaded and unpacked – I was happy to do this chore without little ones underfoot, and their behavior on the long drive was so incredibly stellar that they deserved a swim.  In a couple of hours, some of our fellow vacationers arrived (my mom and our friend Jamiahsh), and we headed out for some stuffed Chicago style pizza at Giordano’s.  We have had the question, why go all the way to Florida to get Chicago-style pizza, but it was YUMMY and we had gotten a Groupon for it which saved us money.

After that, Hubby and I went out together while the kids stayed with Grandma and Jamy, but we didn’t do much  – we were still looking (in vain) for timeshare presentations to attend.  We went to  Old Town, which is an area in Orlando set up like an old-fashioned midway.  There are blocks of little shops – and bars, which were overflowing this Saturday night with intoxicated people- and carnival and thrill rides at either end of the strip of shops.  We normally have fun at Old Town, but I don’t think we will be going back on a Saturday night- definitely wasn’t for kids.