Once again, we have a bit of a food chain residing as pets in our home.  When my cat passed away a year ago now, it left a hole in our household food chain.  Although it’s not quite as balanced as it was when the cat was here, today we find ourselves with a small zoo nonetheless.  Here is the roll call of pets in our house:

Charity – almost 11-year-old female Jack (Jerk) Russell Terrier / Australian Shepard mix with one blue eye and one brown eye.  An extremely feisty but lovable loudmouth who doesn’t hesitate to let you know what she wants, when she wants it.  Will even growl for petting!  World’s worst puppy = World’s best family dog.

Beesly – nearly 7-year-old cocker spaniel mix with extremely thick fur.  We once shaved her and to our astonishment, she became a much smaller dog because her fur is so thick!  She really likes it outdoors, and we call her nordic (of or pertaining to the north, where it’s cold) because she doesn’t seem to mind the cold at all – probably can’t feel it through that blanket of fur!  We adopted her from the humane society in March 2008, and we’re SO glad!  GREAT with kids and an extreme snuggler.  The only problem we have with her is her nasty dog breath!  Oh, and her uncanny ability to escape.  She can open doors and can somehow (repeatedly, not just a fluke!) unhook her way off of 2 dog chains at the same time!  Luckily for us, she always comes back.

Squawky – an 8-year-old Scarlet Macaw parrot.  After living with him for 7 years, I do not recommend parrots as pets!  He screams (and I mean ear-splitting) constantly – a repairman once asked us if we had a pterodactyl behind the door after hearing him scream.  But he is beautiful and drops gorgeous feathers all the time.  And having him has been an awesome learning experience for us and the kids.  He can talk and is very curious about everything.  His vocabulary includes: hi, here kitty kitty, hi bird, and sometimes he just mumbles nonsense that sounds like human words.  In his spare time, Squawky likes to watch The Price is Right and Animal Planet.

Bobby Jack – off-white colored rat who doesn’t like his rat food.  He enjoys many of the treats we’ve given him, especially junk food.  Just after we got them, he was the snugglier of the two, but I think he was just tired from his journey home from the pet store because now he’s as hyper and curious as his brother Oreo.  They are 5 weeks old, and so far, we would agree that rats make great pets!  They don’t bite like gerbils and hamsters, and they don’t scurry like mice.  They are fairly clean animals who groom a lot, are very intelligent and easily trainable.  I think one of the reasons they’re not popular pets to have is because of their super-short lifespans, about 1.5-3 years only.  🙁

Francis – the ladybug I found that became my new pet before I had the rats.  I put him in a bug catcher, and then he went MIA.  Good news – today I found him.  Turns out, there was a little pocket in the bug catcher where he was hiding.  I would check the bug catcher every now and then, and today I saw that he had re-emerged from hiding!

No Name – another ladybug I found in the house.  I won’t kill any bugs I find unless they’re mosquitos – and how I enjoy killing those things!  But any other bug I try to set free, and I just can’t send ladybugs out into the Ohio wilderness to freeze to death.  No Name is in a little container in the kitchen…  I wonder what would happen if I put him in with Francis?

Mally – Ok, she’s no longer part of our family physically, but we will always remember her.  Since I mentioned her earlier, I thought I’d put her on the list.  She was a 10-year-old inbred farm cat.  My husband and I were in college, and we drove all the way out to a farm to get a kitten after reading an ad in the newspaper.  By the time we got there, we wanted a cat so badly that we got one even though the owners said the mother cat had mated with a boy from a previous litter, which is how Mally came to be.  Because of this, she was never ‘quite right’, and was always the size of a kitten.  We named her Malice as a joke, but we always called her Mally.  I was her world, and she hid from everyone else, prompting family and friends alike to joke about our “invisible cat”.  But she existed, I swear, and she was very sweet, at least with me.  She liked to lie on my pregnant belly and would ‘groom’ my hair.  I miss her a lot and wish I could get another cat, but I’m allergic.  I was allergic to Mally, but there was no way I was going to get rid of her.  I got her before any of my kids were born, and so I doted upon her and spoiled her while my husband was working in the wee beginning of our days together.  For those of you who never saw her, here is my little cat: 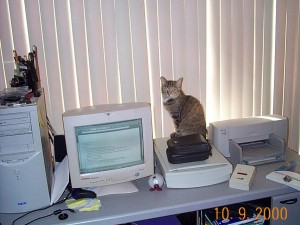