As you might have read in an earlier blog post, I received a pet store gift certificate for Christmas from my husband.  Today I spent it – I picked out the newest member of our family – JJ the parakeet! 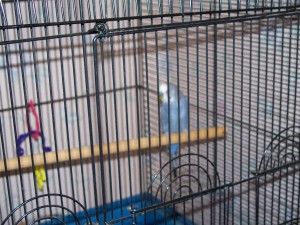 When you adopt a pet parakeet from a pet store, the workers have to barge into the cage full of parakeets with a towel on their hand to grab your bird, and then they put it in a cardboard box for the ride home.  This might sound like a mean thing to do, but in my experience (this is my fifth pet parakeet), the bird recovers very quickly; I wouldn’t even use the word recover really; they always seem just fine.  And JJ handled his transition like a pro!  He actually seemed immediately happy in his cage!  I put my finger in there, and he let me almost touch him, just a few hours after he got home!  He didn’t back away or anything!  I am so excited to become friends with this little guy; he is so cute!  It’s been about 15 years since I’ve had a pet parakeet, and I’ve forgotten about how they just exude happiness!  Already JJ moves his beak like he’s trying to talk and responds to my voice.  Hopefully I will make the time to train this little guy to be the little buddy I’ve always wanted in a bird – I get jealous of my husband’s relationship with his parrot.  Wait, that doesn’t sound quite how I meant to say it…

There’s a fine line between training a bird, earning trust, and scaring him off for good.  JJ seems very patient and ready to learn, and so am I – but getting to spend time with him while there is a trouble-prone toddler toddling around will be my greatest challenge, I think.

Many people have fun parakeet stories; they really are pleasant little birds.  My dad and my uncle had a parakeet when  they were kids named Tippy who would walk on their kitchen table.  They would hold a hand of playing cards, and Tippy would walk up, choose a card, and then carry it in his beak to the edge of the table, let it go and watch  it float down  to the floor.  I’ve heard that many (male) parakeets can talk, and of course they will sit on your shoulder and be your best friend.  So yeah, I’m excited about this bird, and it’s a nice feeling – can’t say there’s been a lot of that lately.  Even if he isn’t easily trained (defying all early indications), I’ve already tremendously enjoyed just looking at him and absorbing his pleasantness, something I look forward to doing in days to come…  feeling a contentment that I haven’t felt for awhile…

Just for the heck of it, here is a timeline of my other pet parakeets.  I was a kid when I had them, so I don’t remember dates or ages – each one lived for around 5-8 years, the usual parakeet lifespan.  But it bugs the heck out of me that I can’t remember which of my birds liked to ring his toy bell –   Tippy, I think?  I named him for my dad and uncle’s childhood pet…  The memories of the bell ringing bird have been replaced in my brain by the obscenely loud parrot we currently own who jangles his bell-shaped toy whenever he starts to get rowdy.  Parakeets are actually in the same biological family as parrots and are in fact classified as parrots.  So technically, we’ve gotten ourselves another parrot for our house, just what we needed, right?  But Squawky, the scarlet macaw (loud a**hole) parrot belongs to my husband (or my husband belongs to Squawky, depends upon who you ask), and JJ is mine – this is important since birds “mate” for life – I’m so happy to have MY bird!

So here’s that rundown of parakeets past:

Spunky – he was blue and fiesty, but we were really surprised when he she began to lay eggs!

Tweety – the only parakeet I had who was of the green /  gold variety.

Tippy – named after my dad’s childhood bird; he was light blue.

Goat –  my sister found him flying loose outside around her work.  They took him in, and when no one claimed him, I named him “Goat” in honor of my dream pet at that time.  He was pretty tame for a “wild bird”!