I was so pleasantly surprised by how much my family liked the new Smurf movie that I was inspired to write a short review.  Going in, I thought I would hate the movie because it didn’t look funny.  And I was a fan of the Smurfs as a kid, so not only did the movie look stupid, but I couldn’t figure out why it took place in our realm rather than the Smurf’s realm – wouldn’t fans of the little blue mystical creatures, kids, and everyone else want to see Smurf village on the big screen?

Don’t worry, we get to see Smurf village, and it’s pretty cool.  Especially the scene where Gargamel breaks in!!  Ok, so I guess that’s kind of a spoiler, sorry about that…  but this is a kid’s movie we’re talking about.  And kid’s movie it is – my kids all really liked it (ages 11, 7, 4 and 3).  The Smurfs have screen time for pretty much 100% of the movie, and there aren’t any boring scenes with a lot of dialogue – these tend to lose the attention of kids.  There are some Smurfy jokes – in this case I’m using “Smurfy” to describe inside jokes written for fans of the Smurfs from decades ago.  Much like the Brady Bunch movies are actually enjoyable parodies of the hit tv show and poke fun at it,  The Smurfs movie has gags about such shout-outs to the 80s cartoon as their names reflecting their personalities (a hilarious joke in the movie that I’m still chuckling about), cracks about how Smurfette always wears the same dress (although more than one joke about this was overdoing it and took the humor away), and multiple references to creator Peyo. 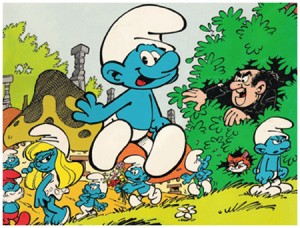 (the Smurfs as I knew and loved them)

From the previews, I thought Gargamel was going to be a bumbling bafoon, one of these over-the-top characters who might be ruined by the actor portraying him as he flailed around aimlessly in a ridiculous looking costume.  But Gargamel as a live person in today’s New York City was actually quite entertaining and even hilarious at times (If you grew up watching the Smurf cartoon like I did, watch for the way Hank Azaria runs as he portrays Gargamel – he imitates the cartoon character so well that it made me laugh out loud!).  I especially liked the inclusion of the little details from the cartoon – like seeing the Smurf cages that Gargamel always had lying in wait for when he finally caught the little guys.  There was backstory explained; everyone knows by now that Smurfette was actually created by Gargamel as Smurf bait, right?  The story line was cheesy but not unbearable even while it made several futile attempts at teaching positive life lessons to kids in the audience.  I could have done without the Katy Perry song reference (is “I Kissed a Girl really a song for kids?  I’ve never heard the song and don’t want to know), and Katy Perry as Smurfette’s voice didn’t really give any personality to the character anyhow – she was just a girl Smurf and nothing like her character in the cartoon.  Clumsy Smurf on the other hand, was a perfect 3d replica of his cartoon counterpart – both in voice and graphics.  I did stop watching the Smurfs sometime after the Smurf cousins (Smurflings) came in, so I have no idea where Gutsy Smurf came from (seems to be a brave Scottish Smurf complete with red sideburns and a kilt?).  I would have liked to see my personal favorite Smurf, Jokey, get more screen time in the movie.  On that subject, I don’t understand why the group of 6 Smurfs with the most screen time (the ones who get to go to NY) did not include such series regulars as Jokey, Greedy, Handy, Vanity or Hefty.  Actually, I didn’t see those Smurfs at all, but then again, we arrived late to the movie so maybe I missed their appearances.  The production staff also did an excellent job of utilizing aspects of modern technology to make funny jokes involving the Smurfs.  Case in point: see the wikipedia reference.

Overall, Smurfs was an entertaining film for the entire family – and there was a huge gap between my low expectations and my high level of enjoyment of this cute movie!  A must-see for anyone who has kids to take to a movie – bonus if you are a Smurf fan!

One more note – here is a list of characters I would like to see in the sequel:
Hogatha, Johan and Peewit, Clockwork Smurf, and Baby Smurf.  But please, NO SMURFLINGS!!

And oh yeah…   I did a search on my own blog to see if I had written about the I’m a Pink Toothbrush song from the Smurf’s 1979 album.  Turns out, I did include it in a blog post that I had written in March 2010, and my kids (and me still!) are big fans of this adorable tune.  It was really fun to read about my speculations on the Smurf movie in this blog post given the limited info I had that time on this “in production” project!  (if you read it, you should know that Quentin Tarentino was oringally cast as Brainy Smurf, but both actor and studio are quiet on why the pairing did not work out…)  So apparently I HAD heard of Gutsy Smurf – and wrote about it in my own blog a year and a half ago!

6 thoughts on “A Smurfin’ Good Time”