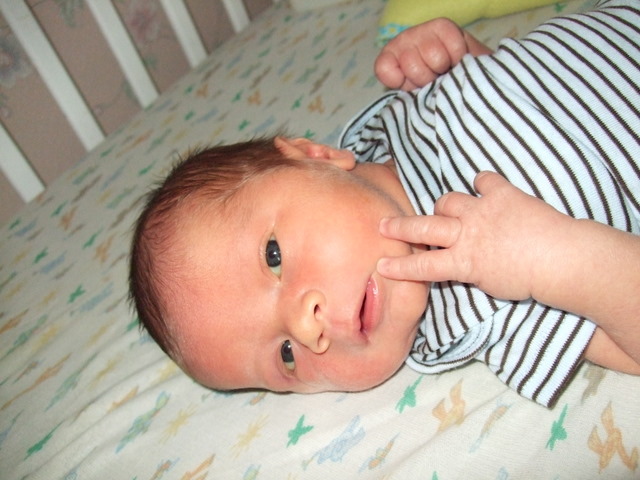 After months of blogging about my pregnancy, it’s finally over and with the best result possible – a healthy, beautiful baby boy!  His name is Christopher Vincent and he was 8 lbs. 2 oz. and 20.7 inches long when he was born at 2:53 pm on July 11.  He is named for his father (at my insistence because my husband felt it was egotistical of him to duplicate his name – not when others do it, just him for some reason) and his middle name is after the baby’s late grandfather, my husband’s father who passed away from Lou Gehrig’s disease when our oldest child was just one year old.  So we’ve been waiting a long time for a namesake for Vincent, and now little Christopher Vincent is here.  He is a perfect baby and rarely cries, although he does seem to have his days and nights mixed up.  Today he slept for almost 5 hours until I woke him up to eat.  But that’s probably because last night he woke up every hour.  I wish I had known he was going to sleep that long because I would have taken a nap!  It’s been difficult for me to sleep at night due to the extreme pain I’m feeling because of the emergency cesarean they had to do to bring little Christopher into the world. 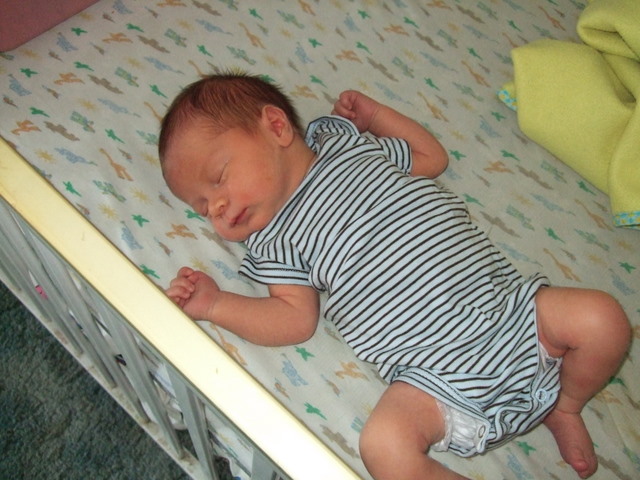 Here’s a warning – I’m going to get a little bit graphic medically here because I feel the need to explain what happened to me.  That way, other moms searching for info about pregnancy, cesareans, etc. can happen across my site, and maybe it will help educate them and ease their fears if they know some things they can expect.  For the rest of you, I apologize, and I suggest just looking at the really cute pictures of the baby and moving on to my other posts.

So I went to the hospital Friday at 7 am to get induced…  I was really excited, but also pretty nervous.  It’s ironic that I didn’t allow myself to get as nervous as I was with my 3 previous pregnancies because my last birth went relatively smoothly, so I figured, why get all worked up when everything will probably be fine?  But it wasn’t.  Well, in the end it was, but until I got to see Christopher, Friday was one of the worst days of my life.  It all started when the nurse couldn’t get my IV in.  I always bruise like crazy from the IV, but they’ve never had trouble getting it in me before.  In fact, I seem to remember writing a post in my blog about what good veins they always say I have.  Anyway, the nurse was trying to “save me a poke” and get a blood sample at the same time she hooked up my IV.  I ended up with two holes on my right hand that swelled up like balloons – and I still had to get the IV put into my left hand.  All that and she STILL had to draw blood from the vein like a regular blood sample, thus not “saving me a poke” at all as she had promised.  But it didn’t matter because I never care too much about the blood draw since I’m used to it and my veins are so easy to find…  but anyway, after all this, I had to make a stupid comment – I said to the nurse, “I hope this isn’t an omen for how the rest of the day will go…”  Idiot.  Apparently I cursed myself because things were just going to get worse. 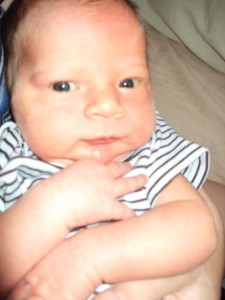 The contractions started getting pretty painful and I called for the epidural, which if you don’t know, is a pain elimination procedure (supposedly) administered directly into the spine.  It’s very uncomfortable to receive one, although it’s nothing compared to the pain of the contractions it relieves, provided someone poking around in your spine doesn’t bother you.  Except that mine didn’t work, which I’m told is rare, so don’t worry, just research other options before you go…  But for me, this is where things go from bad to worse.  Once we’ve all determined that the epidural didn’t take, they make a call for the anesthesiologist to come back and discuss options.  Except that, lucky for me (sarcasm), there was a shift change, so the person who messed up my first epidural was no longer around to mess up a second one.  And, of course the new anesthesiologist didn’t want to do one on a patient who had been done by someone else.  And I should note that every time they call the anesthesiologist, it takes forever and a day for them to come because they’re usually doing other patients in the hospital or who knows what.  I wonder if it’s like that at larger hospitals…  Our hospital is quite small, and I’ve often wondered if there are certain aspects of care that could be better as a result.  Anyway, so the 2nd anesthesiologist is explaining my options to me, and she is talking so slowly, I swear I was close to kicking her – I could still feel my legs, after all, and that was their fault, not mine.  As she’s explaining my options to me (not that there were many left), the nurse decided to check me and that’s when she discovered we didn’t have time to do anything – the baby was coming!  The anesthesiologist was shooed away and the doctor was called, but of course with the way things had been going that day, she had gone home and so we had to wait for her to get back to the hospital.  She got there and I was finally able to start pushing, except the baby wouldn’t budge.  I think the pain was worse than it’s ever been, and I could tell the baby wasn’t being pushed, and then the worst news yet – the baby’s heart rate started dropping.  Everyone started running around, honestly, it was total chaos, but I couldn’t even think straight through all the pain.  They wheeled me into the surgery room where there were like 10 people wearing surgery masks all doing different things.  I was actually in favor of them knocking me out – the sooner, the better.  Of course because of the epidural not working, I felt them cut me open, but in retrospect I don’t know if it hurt more than I was freaked out about being able to feel them cut me open.  My arms and legs were tied down and I will be honest – it was a horrible experience – I couldn’t sleep my first night in the hospital because right when I’d fall asleep, I’d have a flashback of the experience and jolt awake.
Then, I smelled something funny in my oxygen mask and the next thing I know, I’m being wheeled out of the room – it was over!  They had gassed me after all – lucky for everyone involved!  But now I’m stuck with the awful recovery process of a c-section.  One of the worst things about it besides the pain is the fact that I can’t lift heavy objects – including kids.  The second I got home, my 21-month-old reached her arms out and said “Mommy!” with a big smile, and promptly started crying when I couldn’t pick her up.  Between the lack of sleep, the hormone changes, and me missing her, I started crying, but luckily grandma saw me lose it and stepped in to rescue us; giving my daughter ice cream to feed me that made it all better for both of us.  Now, only 2 days later, my daughter seems used to not being picked up, and the pain seems to be getting better, finally.  Yesterday the pain was getting worse instead of better; when I woke up, every square inch of my body throbbed with pain, and I couldn’t move at all – it was awful and totally discouraging.  But, I had forgotten that the doctor said to also use ibuprofin along with my pain meds, so ever since I’ve been trying that, it’s been working for me.  But believe it or not, another pain remedy is baby-smelling.  You just sniff the head of the newborn baby and give him kisses and it makes the pain better too!  The worst part of the whole thing is that I had really wanted more kids, but after Friday, I just don’t know if I have it in me to go through something like that (or worse!) again…  But for now, I am enjoying mommyhood immensely, and the girls LOVE their new little brother.  Taylor and Sammie want to hold him all the time, and Sammie especially can’t keep her hands off him.  She’s always petting his head or touching his hands, or softly kissing him…  she is so gentle; it’s very sweet.  And Disney, being almost 2, is getting her own ideas on how to care for Christopher as well.  Yesterday she tried to insist that he be put into his car seat and of course she threw a tantrum when it didn’t go her way…  But overall, things are going great and wil be even better once we unmix Christopher’s days and nights and get some more sleep!

Oh, and one more hint that will give you a fun momento for the baby book.  If you mail a birth announcement to the White House, they will send you a congrats card from the President!  Signed by an intern, of course, but hey, for some people in the ’90’s, that would have been Monica Lewinsky!  Here is the address you send it to, you can also do this for wedding invitations, though I’m not sure the address is the same.  I would just do a google search for “white house wedding announcement” or something like that.

Send your baby’s name, birthdate and address to: