Our trick-or-treating was actually on Thursday, and we had lots of fun.  It’s a darn shame though that we lost our camera along the way, and even after numerous calls to the police station, it hasn’t turned up.  But after trick-or-treating, we went to our friends’ church party, and they took a Halloween picture of our whole family.  I wonder if they’ll sneak it into the newspaper next year to advertise their party.  They did that this year – imagine my surprise when I’m flipping through the paper the other day and there’s a picture of us from Halloween last year, dressed as a fish with my husband the monk beside me holding Pebbles Flintstone.

I just hope there wasn’t anything else too important on that camera.  Also, it was an expensive camera which my husband had won, not to mention the fact that we’re now without a camera.  We had to finish the rest of our Halloween celebrations without taking any pictures.  On tap today was the community Halloween party at the ice rink – there’s no ice in there yet.  Instead, they set up carnival games, bouncy castles, a cardboard box maze, and face painting for the kids.  They have hay (straw) rides through the “haunted” fields, and each kid that attends gets a bag of popcorn and a trick-or-treat bag to put their candy in when they win it from the games.  It’s very cool, and the best part is that it’s all free – including hot dogs and punch for the whole family.  For some reason, this year’s turnout was a bit lacking – less than 1/3 of the people from last year I would estimate.  I guess it’s because they had it after Halloween this year?  I don’t really get why that would scare (haha) people away – a free fun thing for the kids including dinner?  It’d be hard to keep us away!  Since I only have one Halloween picture of the kids and they’re cute, I’m reluctantly sharing the whole family’s Halloween picture, myself included – I love dressing up for Halloween and wanted to get more mileage out of my less-than-$5 80’s costume.  One of the funnest things about dressing up is being creative and finding things that make a costume for a bargain.  Next year I want to be Dorothy from Wizard of Oz, so I’ll have to be on the lookout all year for a dress and shoes I can use.  Here is a list of people and costumes from this year:

Taylor – almost 9 years old – a costume she put together herself involving a dress, a cape, and devil horns
Sammie – 4 yrs – a princess
Disney – 2 yrs – a unicorn
Christopher – almost 3 mos. – a lion cub
Dad – an escaped inmate
Mom – a time traveller from the 80’s 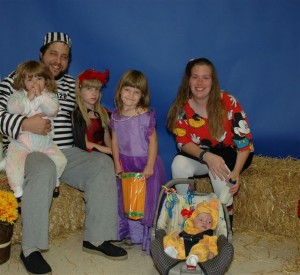 Hope everyone had a great Halloween!