I had a wonderful weekend.  It all started with another visit to a haunted house on Friday night.  Although I enjoyed my previous haunted house experience at Ghostly Manor earlier this year, I just wasn’t feeling the Halloween vibe enough to subject myself to scariness – I didn’t sleep well the night before and little sleep makes me feel claustrophobic – weird.  But anyway, the haunted house was actually a haunted corn maze and they had other things to do at the farm, so I enjoyed myself immensely hanging out with my kids and the coolest teenager I know.  There is just something about farms that make me feel an inner peace; something that was illustrated again during the weekend – more on that in my next post.

Literally a cornfield in the middle of nowhere, Leader’s Family Farms has things to do to keep all ages entertained.  There were even a few things we didn’t even get a chance to try after spending so much time being lost in the corn maze.  Next time I will have to check out the hayride and the coop shoot – I have a special affinity for hayrides because they remind me of the week-long vacations to a dude ranch I took with my family as a kid.  But one thing about Leader’s that really impressed me was their ability to make appealing and fun attractions without the large budget or the mechanical reliance that a major theme park would have.  The “Barnyard” or family area had several things for the kids to play with: bouncy castles, a zip line, haystacks to climb on, a hay maze, slides – all physical activities which would guarrantee kids’ exhaustion giving the parents some “mommy-daddy time” at the end of the evening – the problem is everything was physical for Mommy and Daddy too, and like the DJ noted, “I don’t know who is getting tired out more – the parents or the kids!”  But that illustrates my point about the ability to entertain every age group without spending big bucks – and that is true for both the patron and the establishment.  Actually, let me back up for a minute and go off on a tangent – the purpose of the site, right?  🙂  Why do they call it a hayride when you’re actually sitting on straw?  I learned from a display at the Fort Wayne Children’s Zoo that hay is green and made from grass.  Straw is yellow and made from wheat.  So the kids were climbing on straw stacks, they played in a straw maze, and people were enjoying straw rides…  doesn’t have quite the same ring to it as hayrides, I guess…

But back to Leader’s – they had a DJ, who hosted Karaoke and played wedding-style audience-interactive songs like Hokey-Pokey, The Chicken Dance, YMCA, and Shout.  I was trying to teach Disney (my almost 2 year old) the YMCA, but she only liked the part where we clapped.  Maybe next time we will get down on the dance floor – this time my other girls were too shy and tired was I.  My insanely brave (or psychotic, depending upon who you ask) 4-year-old Sammie was intent on going into the haunted house, and my husband was actually going to take her in, but before she could even enter, she was frightened away from the experience by the scary music alone.  We got a cell phone call just as we were entering the corn maze, and so we retreived Sammie and let her enjoy the experience of the corn maze, which ended up being what I would describe as a twisted game of Survivor.  Take 4 kids, all under the age of 9, into a corn maze and wander around in the dark for over an hour.  No bathrooms, no snacks, and you only have enough stroller for two of them, so the other two have to walk.  It was fun, but also quite an experience.  I would love to go back and explore the maze – without kids though.  And when I got home, I looked at an aerial photo of the thing, and now it all makes more sense.  Here is where I spent my Friday night: 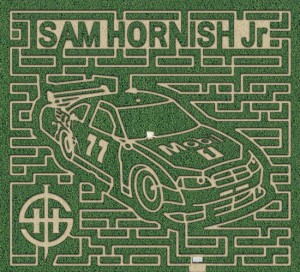 You enter at the small white building at the bottom of the picture and go left.  Where we really started losing it was around the back tire and the spoiler of the race car.  You can see how many forks and circles there are in the paths in that area.  And again, while in the thing, I had no idea what it looked like because I didn’t think to check a map before going in.  I would also bring a flashlight next time; well, maybe not if I didn’t have kids to worry about.  We were using our cell phones for light, but then the other half of our group who went into the haunted house called to see where we were and when I said I didn’t know, the cell phone lost service – adding to the stranded feeling we were experiencing.  I must have stashed my cell phone on top of the stroller really quick because my daughter had turned backwards in her seat and was falling out, so after I fixed her, I frantically searched for the cell phone with no luck – apparently it had fallen off the stroller in the corn maze.  So when we finally got out, I had to tell the staff that I lost my cell phone in there.  As they laughed at me, they asked if it was on vibrate or silence mode – “Of course it is!”  I said, because it would have been too easy to find it otherwise, and let’s face it – a lost cell phone in a corn maze wouldn’t be funny if you could call it and hear it ring.  So a small black silent cell phone lost in a corn maze in the dark?  Forget it.  They did call me the next day though, saying that they did eventually find it, probably with the light of day.  Well, anyway, the corn maze with 4 little children in the dark was quite an experience.  Not horrible, but not recommended…  quite an experience – I can only describe it as having felt like I came through an ordeal after we got out…  it was kind of like being stranded in the wilderness, not knowing when rescue would arrive.  Sure, there are “corn cops” and all you have to do is yell, but I don’t know how they’d hear you and I honestly didn’t want to be the group that yelled for help.  We did it on our own, and for that, we got the satisfaction of accomplishment.

Well, I’ve rambled about that long enough…  I had fun.  I loved the serenity of the farm at night, and it was a beautiful night weather-wise.  It was cool but not cold, and being in rural Ohio meant that we were navigating the maze under a canopy of thousands of stars…  I would love to go back and explore the maze without worrying about the kids being hungry, thirsty, having sore feet or having to go to the bathroom.  And someone remind me that if I have any more kids, a corn maze is NOT a good activity for a pregnant woman – too much walking and not enough bathrooms.  This post is so lengthy I’ll have to save our alpaca farm adventure for the next post…  stay tuned!

5 thoughts on “A Twisted Episode of Survivor”