We took the kids to the county fair on Saturday, and we had lots of fun.  It may have rained most of the day,  but we stayed comfortable using  an umbrella and our stroller awnings for the little ones.  There was only one or two major downpours, and we spent those in the animal barns, looking over the fair kids’ 4-H projects.

It’s always amazing to us how much our 6-year-old  loves going on all the most extreme carnival rides, and my husband and I took turns with her on this:

To her disappointment, she is not yet tall enough for this, but maybe next year:

My little guy took his nap at the fair, and when he woke up, we stopped for a snack.  He began to cry; at first we thought he was just crabby from his nap and that his sister had taken his cookies.  But then his cheek up near his eye began to swell up and turn black and blue.  When he said, “Bug hurt me”, we knew that he must have gotten stung.  We made a precautionary visit to the fair’s EMS squad, and they were excellent with him, even  though he wanted no part of it.  He soon got over his ow-ie with the help of some fair rides, but if you look at his right eye, you can see that he was sporting a minor shiner: 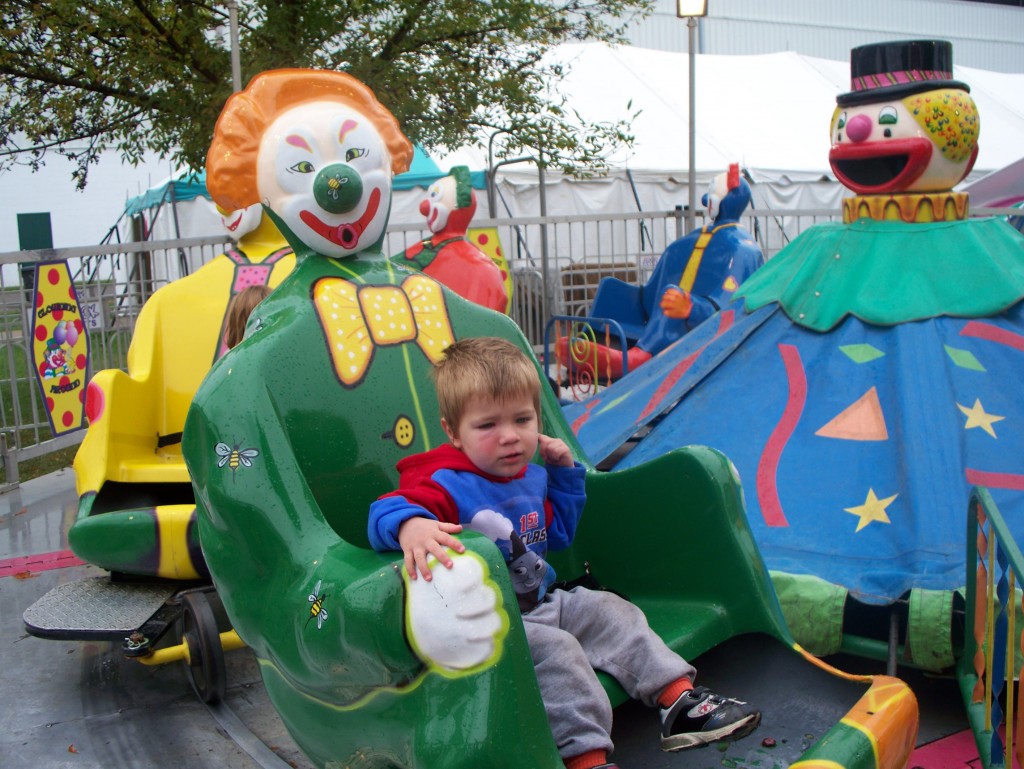 I know, the clowns are scary enough, but our son loved this ride despite how upset he looks – it was just his swollen eye.  When the ride stopped, he got off the clown and immediately climbed into another one.  Hey, you can’t expect a 2-year-old to understand the concept of fair tickets being $.75 each!!

I’m happy to say today that the swelling on his face is down a little bit, and good thing too – I got tired of the scrutinizing looks from people who were wondering, “How did that cute little boy get that black eye?!?”

4 thoughts on “The Little Boy With The Black Eye”