Our little puppy Gizmo is now about 6 months old, and we’ve been marveling at what a handsome young man he’s become.  But yesterday, he had his appointment for his, um, fixing.

He handled it like a trouper, and we haven’t noticed any behavior changes, positive nor negative.  We’re happy the little guy is ok, and he doesn’t even seem to need his prescribed pain meds.  I’ve always had girl dogs before him, and it seems to be a bigger ordeal for females since the incision is larger.  Yesterday when we picked Gizmo up from the vet, he seemed happy to see us but still a little dazed: 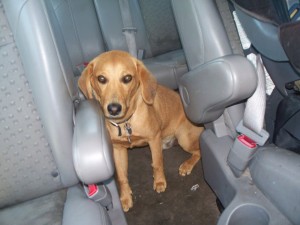 And while we were waiting for the um, procedure to be complete, we had a few hours to kill, so we began at Meijer where the kids rode the 1¢ electronic horse.  We also learned that our almost 2-year-old son knows how to say ‘pop tart’ since he loves the treats:

And then we went over to a nice scenic place on the Maumee River called Independence dam, but we had some unwanted excitement and had to call our friend Mary at work.  Nothing bad, at  least we don’t think, but no one was hurt, if that’s what you’re thinking (Mary is a 911 dispatcher).  The water level was very high due to all the rain in the area recently, and the current was swift around the falls from the dam.  And we kept seeing something suspicious bobbing to the surface – some tires, some large beige objects, and a few other strange looking items that just weren’t moving right.  My first thought was that it was an ATV, and that someone had been 4-wheeling and went into the river.  After a few more bobs, we saw that the wheels must have belonged to a full-size vehicle since we could still see the tires’ rims.  The kids’ imaginations began working overtime, and soon they began to see heads and hands reaching out of the water.  My husband and I saw nothing of the sort, but it was an odd sight, and we figured better safe than sorry so we called Mary’s work number – 911 – and apologized for the non-emergency nature of the call.  The officer that was sent to talk with us was very nice and completely understanding about why we had called, and as it turns out, he is head of the Sheriff’s Department dive team.  At first, he seemed to think that nothing was amiss, but as he watched the bobbing debris, he seemed to become increasingly interested.  He told us he’d keep an eye on it, and we drove further into the park to turn around, and when we came back, there were more officers in the park.  I’m curious to know what was found, if anything…  perhaps our tip helped them locate a minivan that’s been  missing since it went down in the ice 2 years ago or something else useful.  If anyone hears anything, let me know!