I was right about something – I said it was going to be a great weekend and it was, even now, Sunday afternoon, when it’s time for the Easter comedown the kids get when their sugar highs from all that candy wear off!

We celebrated our 10th wedding anniversary (again!) Friday night with a game night, and as usual, we had lots of fun!  Without announcing it to anyone, I decided to have a sort of Mexican theme, which simply meant making a taco dip and margaritas.  It’s not like I usually have themes for game night; I just happened to read a recipe for the taco dip earlier in the week, then we almost got the kids a snow cone machine which inspired the margaritas.  Even though we didn’t get the snow cone machine, my husband said we have a little device that crushes ice; except when it came time for the margaritas, he decided he didn’t want to crush the ice, and we ended up with glasses full of crushed popsicles (?) instead.  So anyway, I don’t remember telling any of my friends it was Mexican game night, but about 4 of them showed up with salsa and/or taco dip!  When the last person arrived a little late and brought salsa, we gave her a standing ovation – hey, most of us are theater people; it seemed like the thing to do!  I forgot to mention that before the game night, we went to Walmart where they had an Easter bunny to visit.  My youngest daughter was afraid of him, so that explains how I got in the picture: 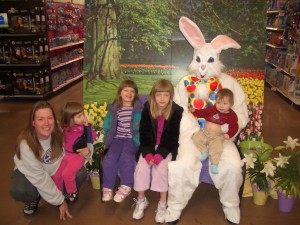 Saturday the community theater had their first-ever Easter egg hunt.  We were actually going to go to the drive-thru zoo / safari park in Port Clinton, Ohio, but we decided to stay and support the theater’s egg hunt instead.  And that was a great decision – the egg hunt was a blast!  There were organized games for the older kids while the toddlers hunted, but our little 2 ½ year old daughter, Disney, was a little shy about picking up the eggs.  The eggs had prizes in them, ranging from candy to tickets for large prizes to coin dollars – and Disney got one of those!  The older kids enjoyed a  variety of games; including a relay race where they were to race to a table and finish two boxes of Peeps – no hands allowed!  It was a riot! 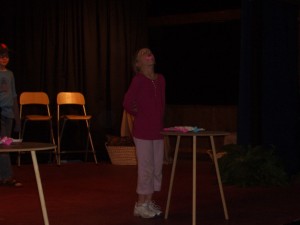 The kids enjoyed doing an actual egg hunt, unlike at our town’s annual Easter egg hunt where they’ve resorted to throwing candy on the floor of the middle school gym rather than try to plan around the weather every year and do it at a playground where they can actually hide the candy.  They even sold lunch, which  was great because after the hunt, we were ready to take off for the zoo and the kids had already been fed!

So we got to the Toledo Zoo and it was a little less than two hours before closing, so we had to pick and choose exhibits to see.  Our oldest daughter really enjoys the Aquarium, so we began in there, and made our way around the back half of the zoo, ending with the great apes.  The orangutans were bedding down for the night, and the gorillas were eating – allowing for some great up close views since a few of them chose eating perches right in front of the viewing glass.  Because the weather is getting nicer, many animals were outside, and we enjoyed activity from the tigers and sloth bears – one of which is our “friend” and enjoys smelling us through the glass and playing with dangling car keys and hats.  My favorite animal of the day were the hippos – the Toledo Zoo has full-size, humongous hippos (not the smaller pygmy variety found in many zoos), and Saturday they were hungry!  The keeper had them cordoned off while he put out their food, and we got to watch as he let them at it, one by one.  The poor hippo who had to wait got anxious and was opening his mouth really wide and rolling over in the water – hippo version of begging, I guess…  but after seeing that huge animal charge and buck in the water like that made me realize just how dangerous a boat ride on the Nile River would be!

The zoo closed, so we went to a few of my favorite types of stores – $1 stores, which was lucky I thought because I was sure they would close around 6ish on a Saturday.  I thought I remembered that about stores from my youth – I remember being disappointed about not being able to stay at the mall later on Saturdays…  but I’m glad I was wrong and they were open until 9 because I was able to stock up on some snacks and birthday party goodie bag trinkets for our soon-to-be 5-year-old’s upcoming party.  When we got home, I was dead tired, but I did catch  the end of an awesome Chicago Cubs game before playing Easter bunny.  The Cubs came from behind the Milwaukee Brewers to tie up the game and then win it with an Alfonso Soriano home run – that guy is on fire this year!!  We got the kids’ Easter baskets ready and hid the non-perishable eggs and went to bed.

Sunday we let our baby wake us – usually my husband wakes with the baby and lets me and the other kids sleep in when possible.  But today I wanted to be up in time to hide the real eggs, so we put our two youngest in the bath, started the coffee, and began hiding eggs.  But not soon after, our oldest starting coming down the stairs, so we had to re-direct her and give her a “job” to do upstairs while we finished so she wouldn’t see us.  We had a great time, but my camera’s battery died, so I don’t have any pictures of that…

Then it was off to church to learn about the real reason we celebrate Easter (how did coloring eggs get involved anyway?  Maybe something to look up later when the kids are in bed and the Cubs are creaming the Brewers!).  I never get bored at church, but I do get awfully tired – today my coffee wore off despite the energizing music and the pastor’s entertaining sermon involving hot dogs and Jesus, of course!  I guess I just get so relaxed since I don’t have to worry about any of the kids for an hour – that’s a good thing!  We did go to bed late last night though…  maybe I’ll catch a nap while the kids play Easter bunny to their pets.  They are hiding carrots in plastic eggs for their rats and hiding dog treats in eggs for their dogs.  The bird got a new toy also, but he screamed at me while I was doing laundry again, so he’s back on the sh*t list.  My friend is running an ‘ugly pet contest’ for a play she’s in, and I think I’m going to enter the bird for revenge – he’s molting and his feathers are nappy right now – HA!