One thing I forgot to touch on in my previous post is the danger of corn mazes.  Maybe I’m just a paranoid person – well, that I already know – but I was wondering how come there’s never been a major disaster at a corn maze?  I mean, what if the thing goes up in flames?  It’s a concern I was able to stash in the back of my mind during our visit Friday night; mostly because the particular maze we visited seemed safe.  They have a watch tower in the middle of it along with various emergency exits and “corn cops” to help guide you out should an emergency occur.  But the first corn maze we visited a few years ago had none of these precautions, and I couldn’t help but let my mind wander, exploring various disasterous scenarios in my head.  “Maybe they’re not very flammable.” my husband said about corn mazes, but that theory was dispelled the other night when we saw all the signs warning about how flammable the corn maze was.  Well, anyway, nothing horrible happened, thank goodness, and I’ve never heard of disaster befalling a corn maze, so until something happens, we’ll be able to enjoy the pastime of corn mazing for years to come.

So onto the rest of the weekend…  Saturday was the day of our town’s Fall Fest, so we walked the kids up to the town square, enjoyed the ambience and picnicked for lunch.  We ran into a few friends, and came home with an extra kid who spent the afternoon with us when we visited a local alpaca farm.  Here are the kids enjoying the bouncy castle at the fall fest with their friend. 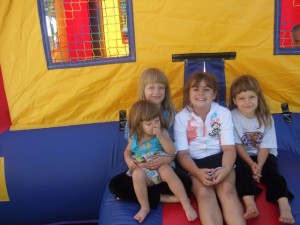 Before the alpaca farm, we visited another local farm where they have an annual Halloween display – it’s really neat.  They go all out for Halloween, and they even made a little train for the kids to ride that’s pulled by a tractor.  Every family that visits gets little Halloween toys, home-grown apples, and a plate of cookies to take home – and it’s all free; done by nice people who just want to share Halloween with their visitors.  Last year we asked about donating money so they can continue their yearly traditions, but they said their insurance company said they can’t except cash but baking supplies and Halloween props would be appreciated.  My parents visited with us last year and enjoyed the Halloween farm so much that they gave me some baking supplies to donate, so Saturday while we were out that way in the country, we dropped them off.  Of course, they wouldn’t let us drop stuff off without taking home a plate of homemade cookies…  these are the nicest people.  Their home is sparsely furnished – yes, they invite everyone in for a visit – which leads one to think that if they have extra money, it’s spent on baking supplies and Halloween stuff.  Also, the woman is in a wheelchair, but none of that stops them from putting up this elaborate Halloween display every year and baking hundreds of cookies to give away.  When we went to their place for the first time a few years ago, we had just moved here from Chicago, and I’m embarrassed to admit that we were confused.  In the suburban Chicago area, there just aren’t many nice people doing things soley for the enjoyment of others, especially at their own expense.  People like that are few and far between and in an area that’s so over-populated, you’re lucky if you run into anyone like that.

Wow, I find myself having to recover from yet another tangent!  So anyway, after the Fall Fest downtown we went to the alpaca farm.  Saturday was National Alpaca Farm Day, meaning that any alpaca farm who wanted to participate had an open house on their farm for people to visit and learn about these animals.  Not only are they cute, but they are profitable as well.  Their fur sells for $12/oz, and one alpaca can yield 140 – 160 oz per year!  And it’s a method of farming that I approve of since it doesn’t injure nor kill the animal.  This farm had a 3-week-old baby alpaca (top picture below), and another one due any day, which is also fascinating because the expecting alpaca didn’t even look pregnant.  The farm also had a wild mustang that they had just rescued from Wyoming (bottom picture below).  Apparently the wild mustangs out there are running out of pasture and food, so people are bringing them to farms so they don’t starve.  This gorgeous animal had never touched a human being until a few weeks ago, and his first contact with humans was them putting him into a trailer and driving him across the country – that must have been frightening for him.  But you couldn’t tell by looking at him.  He was so well-adjusted and was coming up to all the people who were visiting.  They said he had gained lots of weight since he had arrived on the farm also, so that’s great. 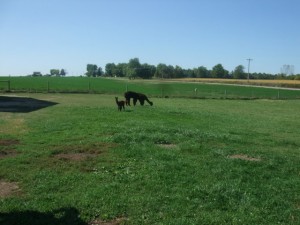 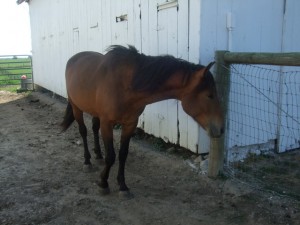 There is just something about being on a farm that makes me feel peaceful.  The rolling countryside is beautiful, and I don’t even mind the stench of farm animals.  I would love to have a farm some day, providing we had enough money to pay a staff to maintain it.  They are lots of work I know, and I don’t know the first thing about running a farm.  But someday I think I’d like to try, and if that’s a route we explore in the future, alpacas will definitely be part of the venture!