Recently a fellow blogger mentioned a dorm fire at the university where his youngest daughter is to attend.  While I’m sure that much was learned from that particular tragedy in order to safeguard future students, it gave me a flashback to my own college days when there was a fire in the dorm where my friends lived.  That particular dorm building was 28 stories high, and I was hanging out somewhere around the 25th floor on the night when the fire alarm went off.  Obviously, we couldn’t use the elevators to evacuate the rather large building, so we had to use the stairwells.  I remember that after descending flight after flight of stairs, the monotony of the flights started to mess with my head a little bit, and by the end, it became difficult to even move my legs in the motion to go down the stairs – maybe a testament to just one of the challenges faced by those in the World Trade Center on September 11, 2001?  Luckily in our case, however, the fire was not threatening to our welfare, and we all made it out of the building safely.  When we got out, we gathered around to watch the flames being extinguished – and much to our surprise, the flames were licking the part of the building where some of my best friends lived.  Turns out, the fire had started in my friends’ room (not where I was hanging out that particular night) and demolished it.  The couch where I had crashed many a night had turned to just ash and a metal frame.  I found it interesting that the firemen gave us a walk-thru of the room afterward – apparently something they do on college campuses?  They taught us about the ‘flashpoint’, where the fire must have started and how hot it was there, and they also pointed out various objects from around the room and explained the temperatures it must have been in the room for the fire to have that effect upon that particular object, etc.  – very informative!  So anyway, the point of this post is that building – it’s called Watterson Towers, and it’s located at Illinois State University in Normal, Illinois.  Not the pertiest thing, ain’t it? 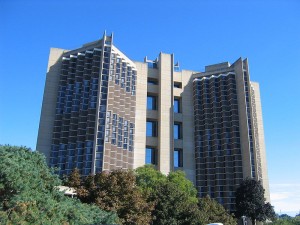 First off, the thing is HUGE; it houses 2200 students.  Illinois State University is a college campus located amongst farm fields in central Illinois – a far cry from Chicago – and Watterson Towers is the highest building between St. Louis and Chicago – a distance of nearly 300 miles.  Also, the design of the structure is…  well, it’s bizarre –  for lack of a better adjective.  I think a college student could have done better at designing a building, hence the title of my blog post.  It has been rumored that the designer of Watterson Towers committed suicide, but I’m not sure if this is true or not.  Click on the link I supplied above to read more about this – someone asked if the designer committed suicide because he thought the towers would eventually collapse, and the person who asked the question mentions that firefighters told them that if there were a fire at Watterson, students wouldn’t make it out alive – go figure since I and hundreds of others are proof that that theory didn’t pan out – thank goodness!  Obviously those rumors are overblown, at least some of them, cuz I can’t find any info about the designer or his fate.  But the bottom line is, it is a very strange design for a building, especially one that is to house college students.  Sadly, more than a few students have jumped from the windows of Watterson over the years to escape the pressure that college students often needlessly feel.

More than a decade after residing in Watterson, it’s still interesting for me to research the building and its design.  It’s amazing to me to remember that college kids used to get up early to stand in a line reminiscent of heavily-sought after concert tickets to get a room in Watterson.  Seems like any of the other dorms on campus would have been much safer and cheaper, for that matter…  But Watterson  was where it was at – at least when I was in school.  It was the most centrally located dorm, and it had the largest rooms by far.  I can understand how space would be an issue when you are rooming with someone (or multiple people, as could be the case in Watterson’s huge rooms) you might never have met.  So anyway, here is the breakdown of the design of Watterson – it is almost maze-like when you’re inside, and I still think a college student could do better at the design part!  Just imagine Move- In day!  2200 students, all their stuff, and their parents!  And remember, it’s a 28-story building, but there are only FIVE elevator stops – and if your student does not reside on  an “elevator floor”, you must carry their stuff up or down flights of stairs to reach their rooms!  To those who are uninformed of Watterson’s design, Moving Day must play out like a cruel joke!

The building’s unique design prevents it from having full elevator service. Of the 8 elevators that operate in the building, there is a maximum of nine stops, eight of which students have access to (maintenance level is for staff only): Service Level, Formal (Lobby) Level, Smith-Jefferson Breezeway, Monroe-Randolph Breezeway, Adams-Pickering Breezeway, Marshall-Clay Breezeway, Madison-Van Buren Breezeway and the Informal Level. Each breezeway level is the third floor of each house. A resident who lived on Clay 4 would stop at the Marshall-Clay Breezeway and then need to walk up one flight of stairs to reach his room.

And that’s the simplest of the directions…  if a student was assigned to Randolph 1, he or she would have to get off at the Monroe-Randoph elevator stop, then walk the breezeway, then descend the two flights of stairs until they got to Randolph 1…  it seems that ISU should have offered a degree just for those who figured out the navigation of Watterson Towers!  And oh yeah, I forgot to mention that Watterson’s elevators were notorious for breaking down!  In the two years that I attended Illinois State, I got stuck in the Watterson elevators twice myself and heard of many others who met the same fate!  I wonder if they’ve fixed any of the problems plaguing that building in the last 10-15 years?

10 thoughts on “A College Student Could Have Done Better”