The title of this blog post is based on a book called To Sleep With the Angels, which details the horrible tragedy of the Our Lady of Angels school fire in Chicago, Illinois.  Ninety-two children and three nuns perished on December 1, 1958 – 50 years ago tomorrow.  The incident became the precedent and the inspiration for sweeping changes in laws and regulations regarding fire safety; such as the installment of sprinkler systems in public buildings, automatic fire alarms, smoke detectors, fire drills, and the end of grandfather clauses which eliminated older buildings from having to comply to fire regulations.  Our Lady of the Angels had undergone a fire inspection just a few weeks before the fire, but because it was an older building, it did not have to comply to all the fire codes because of grandfather clauses.  I came across this website about the tragedy, and it’s full of fascinating info related to the inferno – photos, news articles, maps, models, survivor lists and stories, and more.  Here is a little excerpt from the website olafire.com about the cause of the fire:

I’m curious if the boy who confessed is listed in the survivor lists.  Somewhere else I read that another reason the judge didn’t convict the boy is because it would have meant a sure death sentence for him.  One thing remains true – this was a tragedy of great proportion, and the damage is still being felt by those who witnessed the atrocity and those who survived and their families.  This is evident when you read some of the survivors’ stories on the website listed above.  Many of them have not spoken much about that day, and it seems that almost all of them remember it like it was yesterday.  My husband and I both grew up in the Chicago area, and we agree that most people we knew were associated with the tragedy in one way or another – whether they witnessed it, survived it, or watched it unfold on television.  It’s been 50 long years, and there are still raw wounds.  It was agreed upon by all those that knew Michele McBride, a survivor of the Our Lady of Angels fire, that she died of her wounds sustained in the fire, and that was as recent as 2001.  From olafire.com:

Michele was burned over 60% of her body and hospitalized for four and a half months. She underwent numerous operations which continued for years afterwards. The fire that ravaged her body left her in continuous, lifelong pain. Her pain finally ended in July 2001 when she died of multiple organ failure, no doubt a result of damage inflicted by fire so many years before. In 1979 Michele wrote a book (“The Fire That Will Not Die”) about her experience the day of the fire, and her life thereafter. Michele’s sister, Dae Hanna: “Michele died on July 4th 2001, from long term physical problems suffered from the fire many years ago. May she rest in peace. She never had a day without pain in her legs and joints. May she rest in peace. She disagreed vehemently with many of the theories in the ‘To sleep with the angels book’. Her book THE FIRE THAT WILL NOT DIE was certainly well titled, and the only first hand account of that day. May she rest in peace.”

I was reminded of the 50th anniversary of the Our Lady of Angels school fire by an article in the dailyherald.com, prompting me to do some research into the tragedy and to share with others the olafire.com website which contains so much helpful information.  My thoughts and prayers are with all of the families involved in this horrible chapter of Chicago’s history. 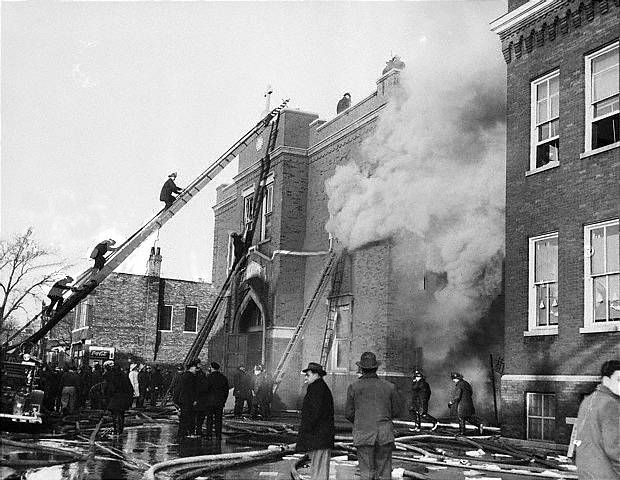 2 thoughts on “Sleep With The Angels”