Sunday, March 22 – I already blogged about this day, but I had skipped the part about us visiting the World Trade Center site (aka Ground Zero) because it just didn’t seem to belong in a happy family’s trip diary.  So consider this your warning; the following post will be emotionally heavy!

On the way there, I was just in visitor mode – on a mission to just get there.  I didn’t really stop to think about how emotional and how gut-wrenching the experience would be.  I’m very glad we went, but man, was it emotionally taxing, to say the least.  The site itself is a pit in the earth – not even a hole, they’re already begun building new buildings, so really it just looks like a construction site, though if you look carefully, you can see that one piece of equipment has a hook painted like an American flag (click on the pic to make it bigger – actually I don’t know that you can see the flag-painted hook in this one, sorry!): 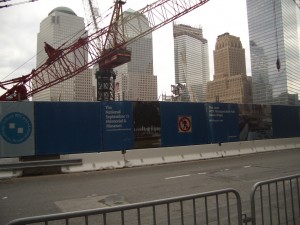 There are fences all around, and it’s difficult to even see past them until you go into the World Financial Center and look out a window and down into the site (click on any of my pics to make them bigger): 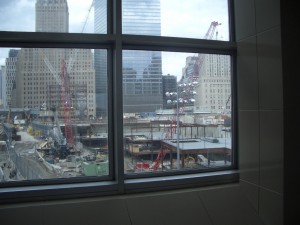 On the way to the site, we passed (yet another) street vendor, and this time, they were selling commemorative books about the 9/11 terrorist attacks.  We flipped through the books, and they actually seemed  interesting, so we bit and we bought.  Those ended up being a great purchase though, because they contain some pictures of the catastrophe that I haven’t even seen on the internet.  One of the pictures in the books is of  a cemetery located only a block or two from Ground Zero.  The picture was taken on September 11, 2001, and the cemetery is covered in an inches-thick layer of ash and debris.  We passed that same cemetery on our way to Ground Zero, and it was eerie to see what it looked like on that day.  Across the street from Ground Zero, there is a statue of a business man with a briefcase; I guess it’s supposed to symb0lize the “every man” quality of the victims, I don’t know, but there it was and here it is: 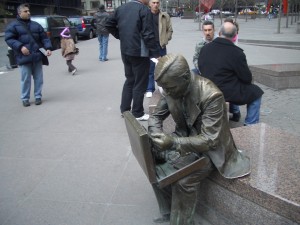 Also across the street from the site is a fire station, Ladder 10, which was heavily damaged by the attacks and collapsing skyscrapers – it actually served as a rest station for many wounded firefighters that fateful day, I later found out.  The station has a memorial on the side, but we (regretfully) didn’t stop long enough to take a picture.  But the garage was open, and there was a firefighter who was more than happy to let our kids climb up on the fire engine, and he graciously posed with a picture of them – what a great guy!  I wonder if he was with Ladder 10 during 2001 and how many of his friends were lost? 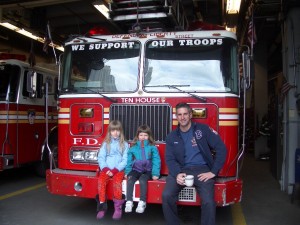 And then there was the museum.  I was worried the kids would be bored, but they said it would only take 30-45 minutes to get through, and I can’t be happier we went.  First of all, the kids were not bored in  the slightest.  They enjoyed looking at the memorabilia: the damaged items, the kids drawings of support, and even the wall of “Missing” posters that victims’ loved ones had posted after the attacks.  I figured September 11, 2001 is a day my kids should learn about, so why not start now?  We did spare a few details, though, like the one about how people were responsible for all of it.  If they had asked, I wouldn’t have lied, but we just told them that planes crashed into the buildings.  After we were almost through the museum, our almost 5-year-old asked me a question I’ll never forget.  She said, “Mom, can God put people back together?”  I hugged her and explained that sometimes people get to go live with God, and that was good enough for her at that moment.

At least one thing I found cool about the museum is that they had a section about what Muslim-Americans went through after 9/11: the discrimination, the victimization, and the violence.

One thing I somehow didn’t get a picture of from the museum was some silverware from the restaurant at the top of one of the towers – the spoon had a hole burned directly through it.

Here are some pictures of other things they had in the museum: 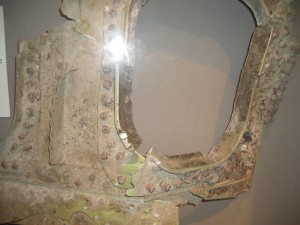 Above is a picture of an airplane window from one of the planes that hit the twin towers.  Below is a picture of what was once an elevator plate labeling a floor in the Trade Center: 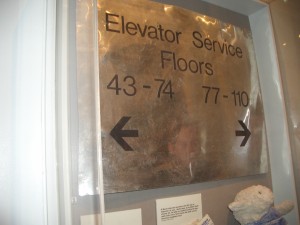 And below is a picture of some items that they found in the debris pile,a stuffed lamb they used to sell in the Trade Center – searchers who found him said “If he could be spared, why couldn’t the people?”  Also pictured are someone’s car keys, IDs, and most eerie, a brochure from a meeting being held in the “Windows on the World” restaurant in the top of the building – note the dates say September 9-11, 2001.  The thing on the right is just a melted mass of metal, concrete, and whatever else: 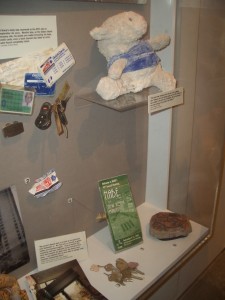 If you’re going to New York, I highly recommend visiting the Ground Zero museum.  I don’t know the exact name of it, but it’s on Liberty Street across from Ground Zero.  Bring tissues, but if you forget, they have some on the walls, and I was grateful for that.  It was a very emotional experience, but I was fine until I saw a letter in a child’s scrawl dated 4/2000, before the attacks.  The letter began, “My hero is my daddy because he is a fireman…”  The letter was written by a kid who lost his dad on 9/11, and that’s when I lost it.

I can’t imagine what those people went through, especially after seeing what happened to some of the objects that were once a part of the World Trade Center.  A very humbling experience; one I will never forget…

God Bless the victims of the terror attacks of September 11, 2001 and their families left behind…