I check out the headlines on Chicago’s suburban newspaper’s website, The Daily Herald, partly because that’s where I’m from (so I know of the locations of the news stories) and partly because my own small town daily paper is kind of boring because we’re… well, crime-less.  No news is good news, so they say, and I agree with that assessment for my little corner of the world.  But far removed am I, and so reading about the disasters in the Chicago area can be quite entertaining; especially the recent stories concerning this woman, Lisa Stone, a trustee from a place called Buffalo Grove, which is an upscale suburb of Chicago. 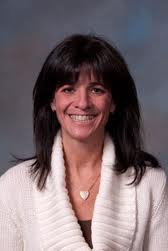 There have been numerous news stories about Ms. Stone, and I didn’t really pay attention until I saw this headline:

If you want to envision grown-up politicians behaving like children, read the article, for it’s like a play-by-play of a school yard bickering session.  If you would like to see the trustees in action, here is a link to video of the actual meeting.  It goes a bit long (a whopping 3+ hours – these poor people were at their meeting until 10:30pm!), but most of the action involving Ms. Stone is in the first 10 minutes (after the Pledge of Allegiance) and in the last 30 minutes of part 3 of the meeting, which is where poor flustered President Hartstein has finally had enough.

Causing most of the problem is Ms. Lisa Stone because she doesn’t seem to respect the most basic rules of politeness nor eloquence.  She interrupts the other board members; speaking out of turn, continuously overriding her superiors and her time limits (time limits which were created, voted upon, and passed by her fellow board members because of her actions at previous meetings), and she just doesn’t seem concerned about any agenda other than her own.  After watching these little pieces of political treasure (ah, Illinois politics, gotta love ’em.  Isn’t this a state poised to have TWO former governors in the pokey at the same time?), I couldn’t resist doing some internet research on Lisa Stone.  The most interesting thing I found was her election website, electlisastone.com where the very same newspaper who provided a play-by-play of her getting told to ‘shut up’  by the board president  endorses her political career with very encouraging words which are displayed prominently and proudly on the top middle of the page!  Also of interest on this site?  Check out the little video on the left side – the then-mayor of the same city, Buffalo Grove, also endorses Lisa in the election.  And guess who the mayor was during the election?  Elliott Hartstein, the same president of the village board who got so flustered with Ms. Stone that he told her to ‘shut up’.  How about those politics, folks!  More entertaining than a 3-ring circus and for free, from the comfort of your own living room!

3 thoughts on “Are We Playing Politics… Or Preschool?”