According to Wikipedia.com, James Cagney never actually said the line, “You Dirty Rat“.  The closest he got was saying “Come out and take it, you dirty, yellow-bellied rat, or I’ll give it to you through the door!” in Taxi.  But rats!  That’s not the point of this post.

Seems I couldn’t resist adding to the Food Chain Gang – we’ve added two pet rats to our family, Bobby and Oreo – the kids chose the names.  It was kind of an impulsive activity to do today, pet shopping, but it was not an impulsive decision, the type that should never accompany a new pet.  We’ve been talking about getting a rat for some time now, but if it ended up being the wrong decision for our family, we didn’t want to be like rats leaving a sinking ship and ditch the responsibility. So we’ve been thinking about it a lot, and today just seemed like the right day to do it.

Rats are friendly, intelligent, non-biting rodents who make great pets.  Rat owners compare their companionship to that of dogs, believe it or not, and from what I’ve seen so far, I see what they’re talking about.  I think rats haven’t caught on as pets because many people don’t like the way their tails look, and they still have a negative stigma from a few incidents of centuries past, namely the Black Death outbreak and the legend of the Pied Piper of Hamelin.  I did some research about both of these historical tales – not that they influenced my decision to get the rats as pets; the research was just for fun.  But I found that the Bubonic Plague, aka the Black Death was most likely transmitted by fleas rather than rats.  True the fleas would travel on the rats, but they more commonly preferred larger hosts such as dogs or cats and used rats when larger animals were unavailable.  The Bubonic Plague was attributed to causing the demise of one quarter of the Earth’s population of human beings at that time, it’s hard to blame people for taking it out on rats.  And the Pied Piper story is basically a legend that tries to explain the disappearance of over 100 children from the town of Hamelin in Germany just before the year 1300.  Most likely, the children were recruited to newer European settlements, possibly by a man in “pied” clothing.  In the legend, there is a rat infestation in Hamelin, and the Pied Piper leads the rats out of the town to a body of water where they all drown.  The townspeople neglect to pay the Piper for his rat removal services, and he returns and leads their children out of town.  Some versions claim they went to a cave, some say another village, and there are even a few versions that say the Piper had ill intentions toward the children – in one they meet a fate similar to the rats.  I enjoyed some of the rat research I read and wanted to share it.  If you want to continue the research on your own, I’ve added to the level of the cheesiness (and length) of this post by putting some common sayings involving rats in italics – try looking them up; the origins are interesting.  But anyway, back to our new little friends.

When we were at the pet store, I didn’t want any part of picking out the rat.  I felt like they are only in pet stores to become snake food (which is why I won’t join the rat race and work in a pet store, as much as I’d like to do the other work in the store), and I didn’t want to have to see the ones that wouldn’t get saved.  As it is, I went over there to take a glance, saw little Bobby, who was about to be put back in the snake food tank, and that’s what prompted me to say, “Maybe we should get two.”  The pet store sent the rats home to us like this, a brown bag lunch for snakes, thus proving my point: 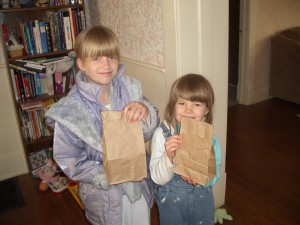 The rats my family chose for us are 4 week old brothers.  They are adorable, incredibly tame, and I’ve already really bonded with Bobby.  He cuddles me and sits on me and grooms himself – rats are actually very clean animals.  The entire start-up for this type of pet set us back about $25.
$2.99 per rat + $3 for bedding + $9 cage + $3 food (for about 3 weeks worth) + $2 water bottle + tax.  We are going to be resourceful about toys and use my kids’ toys for the rats – we’ve already found that they like to crawl through these foam tunnel blocks they have.  And we were very resourceful when making their cage as well.  Instead of trying to decide between the $19 glass aquarium and the $24 hamster cage (I was concerned about the heaviness and the breakable glass of the aquarium and worried the rats would escape the cage), we opted for secret option #3 – a large $9 transparent Rubbermaid bin with a lid in which we poked air holes.  Overall, I’m very happy so far with the new pet decision, and my major concerns have not come to fruition which were: 1.  that our Jack (Jerk) Russell Terrier mix would try to hunt the rats, and  2.  that the kids would unwittingly hurt the rats.  But our dog has not even noticed that the rats are here yet (she’s almost 11 and her sense of smell is failing faster than I thought – that makes me a little sad), and we laid down strict rules for the kids about handling the rats.  I was also worried about having yet another chore to do around the house, but I was promised help from both of the enthusiastic new pet owners (there’s a sucker born every minute).  Here are the cuties – Bobby is the beige one and Oreo is the gray and white one: 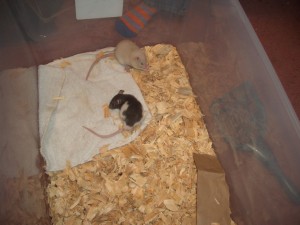