When my family travels, I like to take notes and make a diary of our activities.  I figure it will be fun to read later when the kids are grown up and will also bring back many memories that might otherwise be forgotten.  Now that I’m keeping a blog, I decided to just keep the trip diaries in my blog; that way I don’t have to write them twice and they’re automatically saved for us in cyberspace.  Last weekend, my husband had to go to New York on business, so we decided to make it a family trip and take the kids along.  Here is a log of our activities:

Friday, March 20 – We left the house bright and early, only twenty minutes past our goal of 8 am.  Disney and Christopher had kept us up until 2:30 in the morning the night before, so we were dragging a little, but they slept in so at least we could tie up loose ends without them.  Sammie and Taylor were big helps in the morning!  The kids were very good in the car even though Christopher got a little crabby toward the end of the first leg.
We arrived at the Cleveland Zoo 11ish – not my favorite zoo.  I’m not one to complain about any zoo, but Cleveland had lots of walking to see a small amount of animals.  I think part of the problem was that they were undergoing a lot of construction, so that made for more walking around the construction areas and also to some animals being off exhibit.  They have koalas, but one was sick and the other was sleeping.  I’m glad I got to see it anyway though since seeing koalas is a rare experience at zoos, but now I know why many zoos don’t have them – they sleep 20 hours per day!  Cleveland Zoo also has lots of steep hills, which was a “bear” (pun intended, wink wink) when pushing a double stroller, but luckily for me, that was my husband’s problem.  As we were walking past the zoo’s hospital, an employee told us to come inside because a baboon was about to have a physical.  This is a really cool feature of this zoo – they have glass walls in their examination rooms so that zoo visitors can watch animals’ procedures.  Unfortunately, the baboon was not cooperative, and they couldn’t get it sedated so we didn’t get to see it.  We waited for about an hour, but we really wanted to fit in Akron Zoo in the same day as well, so we decided not to wait any longer.  Here are my girls waiting for the baboon’s physical: 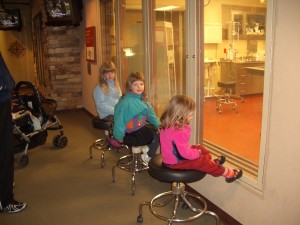 Cleveland Zoo also has a cool rainforest exhibit which normally costs extra admission, but our Toledo Zoo membership got us into ALL THREE zoos we visited on this trip for FREE!!!  What a bargain AND an extra special Valentine’s Day gift from my husband that keeps on giving!  The rainforest exhibit had a cool 2-story monkey/squirrel exhibit, and a really nice view of a swimming gharial (a crocodillian with a long slender snout).  But overall, the animal habitats were lacking.  Thank goodness they are building new ones, but I wish they were building one for the giraffes.  There were probably more than 10 giraffes confined to a tiny indoor room – at least it was only their winter quarters, so once it gets warm, they can go back outside and have room to roam.  Hmmm…  maybe when I’m done with this trip diary, I’ll have to  develop a zoo rating system – that would be fun.  Then I’d have an excuse to visit even more zoos, and re-visit some of the old ones! 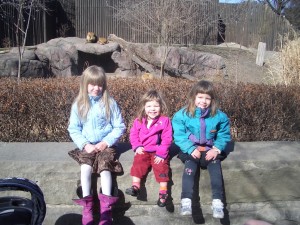 Here are the kids in front of the lion exhibit at Cleveland – then it was on to the Akron Zoo.

“Just Akron, cold beer, and poor poor thing for 2 weeks?”  you ask?  Well, not for two weeks, we were only there for about 2 hours, but I wanted to throw in that line from the stage play Harvey (and later, the movie starring James Stewart) that was running through my head for the two hours.  Stay tuned for Akron!