The kids are growing by leaps and bounds before my eyes, and it’s unbelievable because I’m used to seeing them most of the day, every day – and I can still see the changes.  They are growing up literally before my eyes!

So far this summer, the kids and I have carried a normal daily schedule that finds our time divided between fun activities and miscellaneous appointments (like Bible study class, violin lessons, doctor’s and dental appointments, etc).  I think we’ve done a good job of making the days fun, and we’ve also had some great family weekends since school has let out.  Father’s Day weekend saw us heading out to the African Wildlife Safari Park in Port Clinton Ohio.  We love that place, but it’s almost 2 hours away so we hadn’t made it out there in a few years.  But there was a Groupon a few months ago, and we got a great price on admission, so Hubby planned a trip there.  Can’t go to Port Clinton Ohio and not stop at Cheesehaven – 88 types of cheese, meats, sauces… yummy stuff.  They have free samples so you can try before you buy.  Should you find yourself in this little Lake Erie town (which is near the more well known tourist attraction: roller-coaster filled Cedar Point), stop by Cheesehaven and get a fresh corned beef sandwich – YUM!!

The Safari Park is great –  you drive around the animals’ huge enclosure, and herds of all types of different animals approach your car looking for food!  There are alpacas, llamas, white-tailed deer, elk, elands, bison, reindeer (I never found this one in the guidebook, but it looked like a reindeer to me!), even giraffes and zebras at the end (while you can still feed them, the giraffes and zebras are behind a fence whereas the other animals are not).  It’s so cool to feed all these guys!  Some are dainty, skittish eaters (the smaller deer), while the huge animals like the bison will fill your car with this hot, half-digested hay breath.  It’s delightfully disgusting, and only animal lovers should attempt to stomach this!  Here is the best video I could record while getting accosted by a thousand-pound bison (the kids were frustrating us adults since they would freak out and drop the carrot before the bison could grab it – we felt bad for the hungry fella!)

And what is the poor thing in the picture below?  A llama, I think?  He had a funny lip, which coupled with his flat ear gave him a whimsical look – he was a favorite to feed. 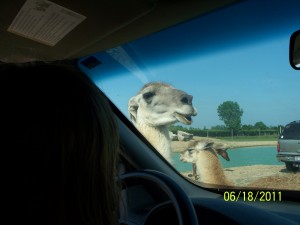 And next is a video of the giraffe  – sorry for the shakiness, but he was too tall to get in one shot!  You can see his curly toungue  that came out and helped him grab his carrot.  The car in front of us had the right idea  – they were feeding the giraffe out of their sunroof – it was a sight to see and I should have taken video!

The Safari Park also has pig races, an animal show, a small walk-thru zoo, and pony and camel  rides for the kids.  It was a SUPER day, followed by a special day to celebrate Dads after 🙂