A while ago, I decided to write a series within my blog about animals, my favorite things.  I just can’t find enough time to learn about animals, and I love sharing knowledge about their incredible attributes.  Here is chapter two in my Interesting Animals series.  To read chapter one about a scaly mammal called the pangolin, click here.

For chapter two, I chose to focus on the duck-billed platypus; an animal who is so strange looking that people thought it to be a hoax when it was first discovered in 1798.

The platypus is one of 3-5 species (depending on the source – animal knowledge is very differential) of  monotremes or egg-laying mammals.  I know, at one point we were all taught that one of the characteristics of mammals is that they give birth to live young, but that is not the case.  Monotremes lay eggs, and the platypus join echidnas (spiny anteaters) in this animal order.  The platypus is found in Australia – seems like they have all the cool animals, doesn’t it?  I just wish they weren’t so stingy with their animals.  I know they stopped loaning out the Tasmanian Devil years ago, and now that the last one died (it resided in Fort Wayne Indiana until its death – I could kick myself for not making the less than hour trip over there to see it while it was alive), the only place to see them is in Australia.  The same goes for the platypus.  I’ve visited many zoos, and I’ve never seen a live platypus.  A quick check on the internet reveals that they are only found in Australian zoos.

But anyway, aside from being an aquatic (with water-repellent fur), egg-laying mammal, another cool thing about the platypus is that the males are actually poisonous.  Both genders have a spur on their left foot, but the males’ spur produces enough venom to really hurt a human being.  Here is a picture of the duck-billed platypus – note the soft, leathery duck-bill which is actually used by the animal to sense the electric fields caused by its moving prey (feeds on shrimp, fish eggs, small fish, and aquatic invertebrates found in streams and lakes). 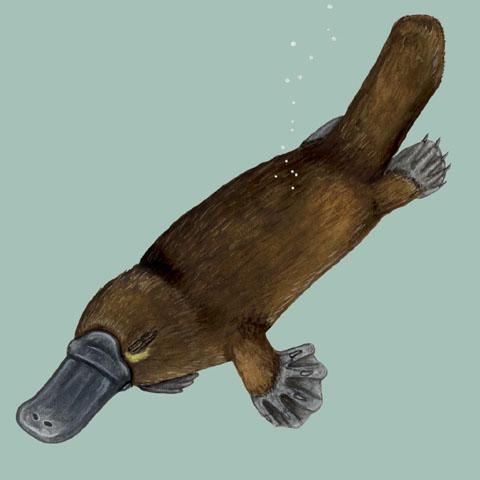 Easy to see how this duck-billed, beaver-tailed, otter-footed, egg-laying mammal was once thought to be an elaborate man-made fraud, huh?

5 thoughts on “A Living Breathing Hoax”