What NOT to do after getting pulled over: 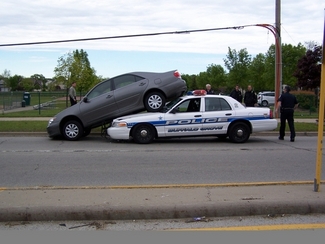 Cops: Niles Man Backs Over Squad Car After Getting Ticketed

Illinois: Police puzzled over driver who drove up and over a squad car.

A man who had been pulled over and ticketed by police ran backward up and onto a Buffalo Grove squad car Friday morning, apparently in his haste to drive off.

Henry Raskin, 70, of Niles had been pulled over by a Buffalo Grove officer on the 400 block of Dundee Road around 11:30 a.m. Friday for driving 58 mph in a 35 mph zone, Sgt. Scott Kristiansen said.

The officer wrote the ticket and returned to the car, and Raskin got ready to drive away. Except he went flying backward.

“(He) apparently was going to pull away at a high rate of speed, but the only problem was that he was in reverse,” Kristiansen said.

He said Raskin was not happy about getting a ticket. He said police are reviewing the squad car videotape to see what Raskin might also be charged with.

Raskin was taken to Northwest Community Hospital in Arlington Heights as a precaution.

Kristiansen said police don’t believe Raskin has any medical conditions that could have led to the crash. Raskin’s age also didn’t seem to play a factor, he said.

The officer, a 20-year veteran of the Buffalo Grove department, was not injured, but his car will be out of service for a while.

“He ended up with the left rear wheel of the car coming through his windshield, about 6 inches from his face,” Kristiansen said. “Luckily, he was not injured.”

The squad car suffered significant damage to the front end, including the windshield and the hood.

Kristiansen said the police investigation so far shows the officer initiated the traffic stop properly. He said officers are trained to treat every stop as if it isn’t a routine procedure so that they are aware when unexpected circumstances like this one take place.

“The officer stopped the car properly and positioned himself properly,” he said.