If you’ve read my first two blog posts about our trip to King’s Island, then you know that I’ve rambled and chronicled, and now I’m blue in the face and ready to move on.  I would like to rate most of their rides though for those who are curious and/or contemplating a visit to the theme park.  Somewhere there is a Discovery Channel show about the 10 Most Extreme Roller Coasters I’d like to see – I hear King’s Island has 3 or more on the list!  Going to hope that it’s on youtube…  If you haven’t read my previous post, here is my ride experience scale: 1♦ = not so good, while 5 ♦ = awesome!

The Racer – 3♦.  A wooden racing roller coaster that doesn’t really race.  According to our guide, people on the different racing trains would trash-talk each other so much that they built a wall to separate the two train colors.  When we rode, the first time the blue train was not operating, and the second time, the trains did not go at the same time.  Still a fun wooden coaster though!

Flight Deck – 1♦.  Formerly called Top Gun, but whatever you call it, we did not like it.  It’s a roller coaster whose car is suspended from the track above the car, which basically amounted to a lot of swinging.  Ok for me, not my favorite, but it made my husband sick.

Vortex – ¼♦ – This one only gets a quarter star to put it on the map –  my map key didn’t exactly contain a zero, so let’s give it a quarter star just because it’s a coaster.  But otherwise, yuck.  Jerky, but without any real thrills.  Reminds me of the Shockwave they used to have at Six Flags Great America in Gurnee Illinois.  Funny how I used to ride that over and over, especially near park closing when it would empty out.  We would just stay on Shockwave until they kicked us off!  But as an adult, the ride type doesn’t work for me.

Invertigo –  3♦.  I need to go back on this one when it isn’t lunch time!  I think the Flight Deck/Invertigo/haven’t had lunch yet combo did me in as I  felt a bit queasy after this one.  Basically, you go up and through a loop, and do the same thing backwards.  The cool thing about this one is that you face other riders, which I actually don’t know if that’s a cool thing or not – our guide recommended we try sitting on either the front or back of this one so we didn’t have to face strangers on the coaster.  I did enjoy how this one whizzed through the station though, and like I said, I will have to try it again on a full stomach.

Sponge Bob 3D Ride – 4½♦.  I really liked this one!  A lot of fun, and much more movement than its counterpart at Universal  Studios, the Jimmy Neutron ride.  It’s a 3D Sponge Bob movie where the seats move as you move about Sponge Bob’s world.  The scenery is great, and not only is it 3D, but the rider actually gets to move along with the movie.  As a bonus, the movie is very funny, and I loved the story!

Whitewater Canyon – 4½♦.  You know the type – a large round boat makes it way down a “river”, complete with rapids, drops, and waterfalls.  I always love this type of ride and much of the fun is riding it with your friends or even  strangers trying to see who is going to get the most wet!  The day we went, it was an unseasonal 70°, and getting wet wasn’t quite as enjoyable as usual.  This is actually one of the smaller versions of this type of ride that I’ve been on, and the boat seated 6 people instead of the usual 8, 10, or 12 as I’ve seen before.  But this version has an added element of fun – friends, family, and people who have ridden the ride can take revenge on riders by putting in a quarter for a chance to launch a water cannon at passing boats.  This part is lots of fun, although they need to get the change machine working so more people can squirt!  We went on with some kids who didn’t get wet enough in their opinion, so they rode again while we kept watch at the water cannons and succeeded in getting them SOAKED!

Backlot Stunt Coaster – 2♦.  Lameness.  But remember, I’m used to Universal Studios since we try to trek to Orlando yearly.  This has nothing on Universal.  But I suppose for younger kids, it could instill a feeling of bravery as they race past exploding police cars.  It goes kind of fast up a winding track, which is kind of different, but other than that, the excitement kind of fizzled, and the ride isn’t all that long.  The brightly colored cars you ride in are super-cute, but does that really matter?

Adventure Express – 1¾♦.  This is also kind of lame, which is alright, not every coaster has to be top thrill.  But this one is like Big Thunder Mountain Railroad at Disney, but that is bigger and faster.  Adventure Express was going alright until the rider finds himself in a climatic tunnel, climbing a lift past moving robots and everything.  Then when you reach the top – nothing.  Nada.  Literally – the ride ends here.  What the ?

Scooby Doo and the Haunted Castle – 4½♦.  You ride through scenes of Scooby Doo trying to shoot the bad guys with a laser gun attached to your car – cool!  Even better, I actually beat my husband on this one!  This ride is a lot like Buzz Lightyear at Disney, and I can never even get close to Hubby’s score on that one.  He must have had an off-ride though, cuz the second time we rode he beat me silly again.  Oh well, this ride is awesomely themed.  They remembered quite a few of the bad guys from the old Scooby Doo tv show, and there were sound bites galore.  The castle looks awesome from the outside,  and we even drove a Mystery Machine:

Other fun rides at this park that deserve at least an honorable mention are the railroad (just a standard train ride, but oh-so-relaxing after a huge day of coaster riding!), the Wild Thornberry’s River Adventure (kind of a lame log-flume type ride, but still lots of fun), the Eiffel tower (we didn’t ride it, but it was gorgeous to look at), and Dodgem (plain ole bumper cars, but when is the last time hubby and I got to ride ‘n bump kid-free?  I don’t even remember!).  Because we splurged and got the guided tour, we even had time to catch some shows – an ice show and an 80’s review.  The ice skaters were pretty good; especially one guy who even did a triple axle!  The 80’s show was fun, even though many of the performers were incapable of both singing and dancing at the same time.  There was a special  Michael Jackson tribute, even though he had passed away only a week before our visit.  But there were afros, mullets, big bangs, leg warmers, bright colors, even giant Rubik’s cubes, and it was fun to sing along to the rockin’ 80’s tunes.  One did get the feeling however, that not one member of the show had any idea of what the ’80’s was actually like…

So there you have it.  I’ve reviewed and rated the rides I rode and found worth a mention.  If you are thinking of visiting, you should know that King’s Island also has a huge kids area, and many more rides I didn’t mention.  We tried to stay away from any rides with a lot of spinning or anything that looked too crazy (especially this one called Delirium): 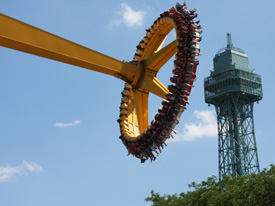 It looked a little too crazy/dizzy for me; maybe if you go to King’s Island, you can try it and let me know what it’s like in the comments!

8 thoughts on “VIPs For A Day (part three of…. well, I’ll try to make this the last part)”