In past  summers, Hubby and I have been lucky enough to have all 4 kids watched by Grandma for an entire week.  This gave us time for some kid-free fun together with just us, as well as time to catch up on necessities like work and sleep.  For the past two summers, we’ve made a trek  down to Cincinnati for some FUN.  We’ve been going to King’s Island, an amusement park in the suburb of Mason.  Their VIP tours are quite reasonable, considering all the benefits you get (your own personal park guide for the day, all you can eat for lunch, and front of the line ride access, to name just a few!).  We’ve been making a weekend of it, going to the world-class Cincy Zoo one day, followed by a VIP tour at King’s Island the next.

I was on their site today, and I saw this cute little teaser video starring Don Helbig, the public relations manager at King’s Island: the same guy who meets us by the awesome 5-minute long wooden coaster The Beast for our backstage tour, which is also included in the VIP ticket.  Having ridden King’s Island’s wooden coaster The Racer over a whopping 12,000 times and holding the Guinness record for coaster riding, Don is fascinating to talk to.  He made this video to unveil King’s Island’s new 2011 attraction – or so I thought.

So after seeing the video, I did a bit of internet searching, and it didn’t take me long to find the attraction being unveiled on March 18; here is your sneak peak: 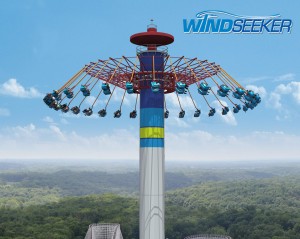 The Windseeker is a swing ride, but it’s going to suspend riders 301 feet above the ground, swinging at speeds over 30 mph!!  Even though I have not been enjoying the height of the coasters in the past few years, I would try this!!  Thing is, we won’t be making it to King’s Island this summer because buying a ticket to enter the park would be a waste of money for me this year – I am due with my 5th child in the fall!  I’m not too broken up about missing the new ride or any of my old favorites; after all, I’d rather have a baby than a trip to King’s Island a million times over, but for the record, I would try this ride!!

We’re going to have to find something equally fun and pregnant-lady-in-the-summer-friendly to do this summer, but it might be a challenge – everything I can think of involves being outdoors and also lots of walking.  Not only that, but since there are now 4 kids, Grandma wants to split their vacations with her into shifts during the Grandma week, meaning Hubby and I are down to zero kidless days.  Oh well, there is plenty of time for that in about 20 years, right?!?