I’ve always wanted an African Grey parrot; it all started when I was a kid and I read the wonderful book “Harry’s Mad” by Dick King-Smith, the guy who wrote the book-turned-movie, The Water Horse.  African Greys are not nearly as “beautiful” (colorful) as other parrots, but they sure can talk and even use logic to demonstrate an intelligence level equivalent to that of a 4-year-old human child.  We did end up with a parrot, but we got the eye-candy version instead, a Scarlet Macaw.  Here is a picture of Squawky – he was molting at the time, which is why his chest is gray: 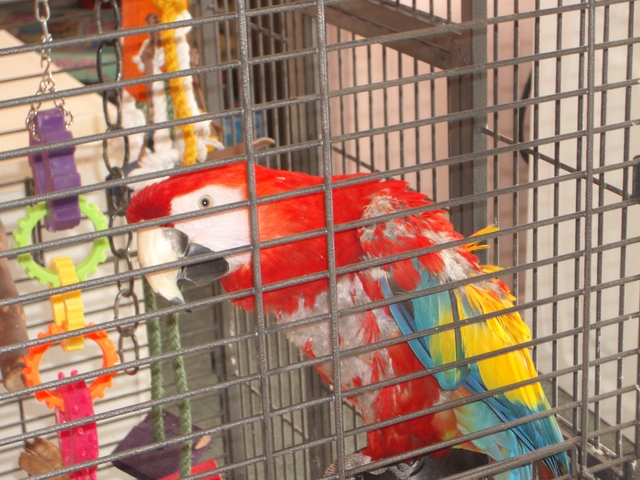 At the time we got him, it was an opportunity we couldn’t pass up: he was a previously owned bird who was still very young and inexpensive, and gorgeous, of course.  We’ve had him for 6 years now, and he is part of the family.  He has quite a personality, and I get a kick out of most of the things he does.  He’s in my laundry room, so it’s an especially nice break in my daily routine when I open the door and he bursts forth with a very enthusiastic “HI!”.  But there are days when I still long for my African Grey, mostly because Squawky is my husband’s bird, which means that no one else is allowed to touch him since birds tend to bond to one person.  I think Squawky loves me and the kids, but we are not allowed to touch him under any circumstances.  We can talk to him, and he’ll even talk back.  He can be quite entertaining with his vocabulary of about 20 words, more if you count the human and animal sounds he likes to imitate.  He especially likes to laugh.  He likes to pick up toys and drop them, then he’ll laugh.  But sometimes, and it’s especially horrible when he’s molting, sometimes he screams so horribly loud, you cannot hear yourself talk or even think.  I’ve had to threaten numerous times that my laundry duties will be forfeited to the owner of the parrot if I keep getting screamed at in the laundry room, but somehow, he always stops before it comes to that.  So anyway, there was a recent article in the news about an amazing African Grey parrot named Yosuke Nakamura – he lives in Japan – who got lost and then found.  He aided in his own rescue, even though he wouldn’t talk to the police!  Read the article here:

TOKYO, Japan (AP) — When Yosuke the parrot flew out of his cage and got lost, he did exactly what he had been taught — recite his name and address to a stranger willing to help.

Lost in Tokyo, Yosuke the parrot was able to give his name and address to get taken home.

Police rescued the African grey parrot two weeks ago from a neighbor’s roof in the city of Nagareyama, near Tokyo. After spending a night at the station, he was transferred to a nearby veterinary hospital while police searched for clues, local policeman Shinjiro Uemura said.

He kept mum with the cops, but began chatting after a few days with the vet.

“I’m Mr. Yosuke Nakamura,” the bird told the veterinarian, according to Uemura. The parrot also provided his full home address, down to the street number, and even entertained the hospital staff by singing songs.

“We checked the address, and what do you know, a Nakamura family really lived there. So we told them we’ve found Yosuke,” Uemura said.

The Nakamura family told police they had been teaching the bird its name and address for about two years.

But Yosuke apparently wasn’t keen on opening up to police officials.

“I tried to be friendly and talked to him, but he completely ignored me,” Uemura said.

If it weren’t for the expense and especially the screaming, I would definitely have my African Grey by now!