As you might have read in my blog previously, we have a pet Scarlet Macaw parrot.  His name is Squawky, although he is more ‘screamy’ than he is ‘squawky’.  Occasionally when the weather is warm enough, we take Squawky outside – he either goes for walks with our family or he gets tied to a tree (so he doesn’t fly away) to enjoy nature.  A few weeks ago, we were sitting in our dining room having lunch when we saw the man from our local pet store approaching Squawky in the tree out front with a towel on his hand.  “He’s going to take your bird!”  I said to my husband, “You have to go outside!”  I guess this is where I should get it in that I didn’t think it was a good idea for Squawky to be outside alone in the first place, but we had to give the kids lunch and Squawky was enjoying himself so we didn’t make him come in with us.  So anyway, we ran outside, and told the pet store guy that he was our bird – apparently our neighbors were unaware that we had a parrot (guess they hadn’t seen him outside before; sometimes  we put him in the backyard).  So the neighbors called the police, who called the pet store, who sent the bird-catcher.  He thought it was someone’s lost bird, and he was going to “rescue” Squawky – and lose some fingers in the process.  It’s not an exaggeration when they say that adult Macaw parrots can snap a broomstick handle with their super-strong beaks.  Check out a few of my husband’s parrot battle scars or use your imagination to see what one of those beaks can do to a fleshy finger.  Luckily we got out there just in time to save the pet store guy’s fingers, and he apologized profusely, as did our neighbors who had called the police.  The pet store guy found it unbelievable that we could have a macaw parrot (a notoriously loud bird) and not have the whole neighborhood know about it.  I told him that the neighbors on the side of the house where Squawky’s room is probably know about him, but the neighbors who called the police live across the street –  plus Squawky doesn’t scream when he’s outside.

But all’s well that ends well – as much as that bird irritates me sometimes, he has been a part of our family for 8 years now, and I don’t want to lose him.  Well, not to have him stolen or lost anyway – getting paid the going price of an obnoxious Scarlet Macaw might be kind of nice…  A joke, sort of.  🙂

I looked around for a picture of Squawky in the tree, but I guess I don’t have one.  So here he is having a tremendous amount of fun taking a bath.  He is a bit larger now because this was taken 7 years ago. 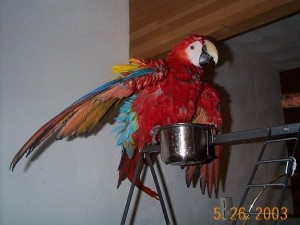 **UPDATE** – Squawky was back in the tree tonight, so this time I made sure to get a picture of him enjoying his tree: