Raise your hand if you remember Winnie the Pooh and his tendency to get his head stuck in the pot of “hunny.”  Okay, you can put your hands down now.  This story isn’t about Winnie the Pooh, but rather Gracie the horse.  I honestly can’t say I have ever heard before of something like this happening.  Fortunately the horse is relatively unharmed from her ordeal.  Story below picture.  Click picture or headline for original story with a second picture. 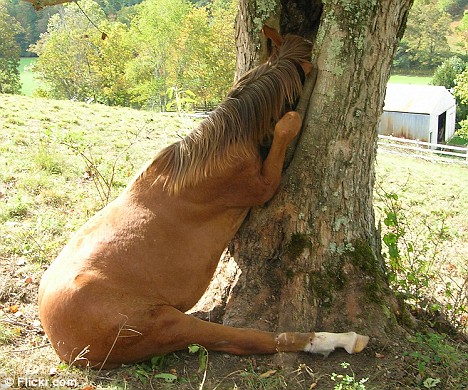 Having a mare: The horse who got its head stuck in a tree

They say curiosity killed the cat. It didn’t do this poor filly any favours either.

When she managed to squeeze her head into a hole in a tree she had been keen for a good nose around.

The only problem was she couldn’t get it out again. Tired of trying, and stuck fast, she looked as silly as Winnie the Pooh with his head in the honey pot.

Finally, neighbour Jason Harschbarger heard her dismayed whinnying across the fields in Pullman, West Virginia, and came to her rescue.

Gracie, as the horse is called, was left with a dislocated jaw and a few cuts and scrapes from her ordeal.

The tree, however, was considerably worse for wear.

Mr Harschbarger had to resort to a chainsaw to cut Gracie free.

He said: ‘She has a few cuts on her face and ear.

‘Last I heard her jaw was a little dislocated but I think it is healing up and she can eat on her own again.’

I guess that’s what happens when you start horsing around!

5 thoughts on “Curiosity didn’t kill the horse, but…”