My little boy Christopher is 3 years old, and we’ve been working on potty training for a while now.  He gets it, but he just doesn’t remember to make it to the potty every time he has to go.  The other day we were in Walmart, and he wanted to use the potty.  Because he was with mom, he had to go in the ladies’ room, and because he is an independent little guy, he wanted to go into the stall by himself.  Next thing I know, there was a huge CRASH!

It seems that Christopher had taken off his diaper and tried to throw it away in the little “garbage can” that they have in each stall of a ladies bathroom.  The receptacle somehow fell off the wall, clattered to the floor, and now used tampon applicators were rolling everywhere.  Beyond disgusting, right?  How are those things not a bio-hazard?  Being the considerate little boy that he is, Christopher tried to pick up the garbage, but thankfully I was right there and shouted NOOO just in time before he touched anything.  After that happened, my sensitive little guy was trying to finish going potty with his hands on his ears.  He wouldn’t let go, not only because of the loud noise the “garbage can” made when it fell but also because the automatic flushing toilets really scare him too.  After we got all that sorted out, he did pry his hands off his ears long enough to wash them, but then those darn automatic energy-saver hand dryers got the best of him – those things are loud!  In the end, potty mission accomplished, but in the future, it might just be easier for us to stay home until we’re done with this potty training business! 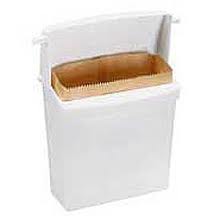 3 thoughts on “Warning About Potty Training At Walmart”