About a year ago, I had a blog post called “The Mayor And The Macarena”.  It was about my family’s first roller skating outing (it was a birthday party for the Girl Scouts organization), and my post was so titled because our county’s only roller skating rink is owned and operated by the town mayor.  Not quite being fully assimilated to small town living, I guess, I got a big kick out of watching the mayor play DJ; especially when he spun old has-been but essential tunes for us to dance to on our roller skates like “The Macarena”, “YMCA”, “The Chicken Dance”, and “The Hokey Pokey”.  So it’s that time of year again – Happy Birthday Girl Scouts! – and we attended the birthday party at the roller rink again on Sunday.  That reminds me, did you know that the infamous chicken dance now has lyrics?

Well, that was news to me because as far as I knew, the chicken dance was just that – a dance with motions and no lyrics, but I bet you can guess which word the kids absolutely LOVED putting the emphasis upon…  ah, kids!

Coincidentally, our Girl Scout’s younger sister was also invited to a birthday party at the roller rink on Sunday.  Which meant 5 straight hours of roller skating!  After 5 hours, the girls had showed so much improvement!  We even got skates for our 2-year-old, but those skates were practically bigger than she was, and they were so heavy, she didn’t have a chance: 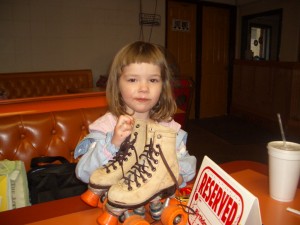 But like I said, after a few hours on the skating floor, the older two really got the hang of it, despite a few spills and some breaks, err, rest periods, not broken bones, thank goodness! 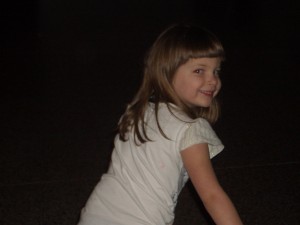 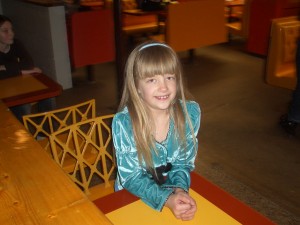 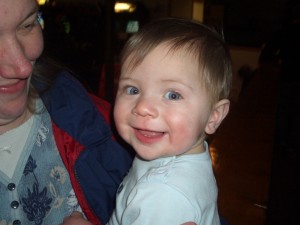 A great way to cap off an extremely busy weekend… we had so much fun, I think we’ll make a few more trips over there even before the Scout’s party comes around again next year!

9 thoughts on “The Mayor And The Macarena – Part Deux”