It holds the Guinness World record for best-selling single computer model of all time, so who had a Commodore 64? 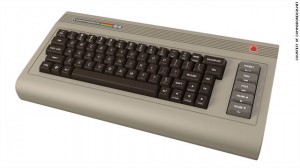 My family had one when I was growing up, and I enjoyed playing hours of games on it.  I remember how novel it was that we could create a sign, card, or banner on the computer and then print it out –  complete with pixel-riddled graphics and what-do-you-call those side strips on the paper with the holes in them that you tear off and either discard or twist them together and make art out of them.  My uncle had a subscription to Loadstar, which was a Commodore club of sorts – he would get magazines and new games monthly in the mail.  I used to love some of those Loadstar games, unfortunately, I can’t find them to play on emulators now.  I really enjoyed an Activision game called Toy Bizzarre, and my all time favorie game for the Commodore 64 was Maniac Mansion – I was addicted to it until I won it, and then I had to go back and win it with  all the different character combinations.  They did make a version of Maniac Mansion for the original Nintendo, but I was biased toward my Commodore version.  I always thought that game would make a great movie (think Clue), and when I was younger, I tried to write the game into a novel but never finished it.

So what’s got me thinking back to the 80’s days of the Commodore today?  I came across an article on cnn.com about how advance orders are being taken for the resurrection of the Commodore here in 2011.  It’s being made to look just like the Commodores of the 80’s, but it will have today’s computer capacities since the ’64’ in Commodore 64 referred to the unit having 64 Kilobytes of memory – about the equivalent of one long email, according to the article.  If you’d like to read the article, click here.

8 thoughts on “The Return of the Commodore 64?”