Today is Abraham Lincoln’s birthday.  The 16th president of the United States would be 200 years old today if he was still alive.  Unfortunately, an assassin’s bullet cut his remarkable life short at the age of 56 – not that he would still be alive today, but his assassination was still very tragic of course.  Because this is such a milestone “birthday”, Lincoln has been in the news a lot lately.  I learned something really interesting about his widow, Mary Todd.  Ten years after Lincoln’s death, Mary was hospitalized in a mental institution for being delusional and for spending too much money.  I guess her delusions were caused by a sleep medication she was taking, but intriguing to me is the fact that the institution where she was hospitalized was in Batavia Illinois – a stone’s throw from where I spent most of my childhood.  Next time I’m in the area, I’m going to have to take a look at the place – it’s now apartment buildings, but I think it would still be cool to see the land that used to be the mental institution which housed Mary Todd Lincoln.

Another interesting Lincoln tidbit; I found this picture on the internet, and I thought it was so cool I had to share it.  It captures Lincoln in real life, not just posing for a portrait as many people are used to seeing him.  The man on his left was his bodyguard, Allan Pinkerton, and the man on the right was Major Gen. John A. McClernand. 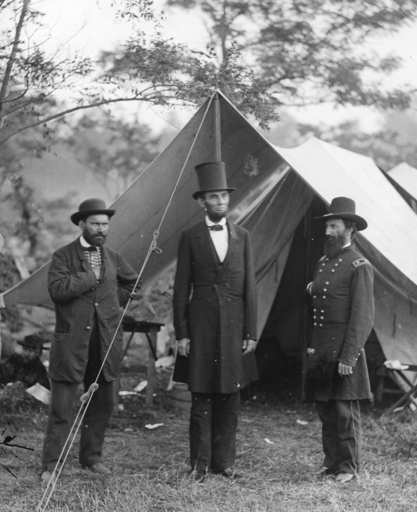