I haven’t done one of my board game reviews in awhile, so I thought I’d write about a little treasure we found at the Goodwill tonight and actually had time to play – Totally 80’s Trivial Pursuit.  Since my husband and I were both children in the 80’s, we thought we’d enjoy this version of the popular trivia game – even though I threatened to kick some butt since  between the two of us, I’m the one who’s chosen to fill her head with useless knowledge (most of which I’ve forgotten over the years anyway!), but what I’m trying to say is that I usually win the trivia games in our family.  So we start to play the game, and the pawns are in the shapes of various pop culture staples in the 80’s.  There is a Care Bear, a computer, a Trapper Keeper, and a CD – cute!  And I loved how the pie pieces are stored in the bases of the pawns when players earn them!  My only complaint is that there definitely should have been more pawns – can’t believe there wasn’t even a Rubik’s Cube pawn?!?  How about some Jelly Shoes?  A banana clip?  Cabbage Patch Kid?  Atari console?  The list could go on and on…  Here are the ones they did include: 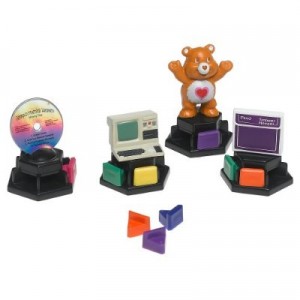 But anyway, my husband did end up beating me, but I have two excuses.  1.  The kids came down in the middle of the game and kept trying to play with the pawns which was distracting and I  lost my focus.  2.  My husband is older than me, and therefore he remembers more of the ’80’s – haha!  Ouch!  Ok, so I’m a little bit of a sore loser –  rematch tonight?

(I guess this didn’t end up being much of a review.  It’s a Trivial Pursuit game, nothing new there.  But if you were around during the 80’s and enjoy getting quizzed about the decade of excess, you’re in for some fun!)