One thing I was excited about doing in my blog was writing board game reviews.  Since my husband and I have a game collecting hobby and thereby an extensive amassment of games, we can find a new game to play on any given night.  But the kids keep us really busy, and so I forgot all about reviewing board games on my blog, not to mention that it’s difficult for us to find the time to play them.  But last night amidst the chaos of our house, we found time to haul out a new game and learn it.  It was such a fun game that it inspired me to write a review – anyone heard of the game Number Quest (or sometimes known as Nubble) by DK Publishing Inc.?

The game board consists of a color-coded grid with numbers on it.  The game is simple to learn, yet complex to play.  Number Quest combines chance (dice), stratagy, and traditional board game elements such as paper money and tokens.  To begin, a player rolls 4 dice which each display the numbers 1-6.  The player then uses these numbers to create any whole number 1-100 with any combination of addition, subtraction, multiplication, and division.  The player then places their color chip on the corresponding number on the game board.  The color of the number’s space on the board determines how much money a player receives for creating that number.  There are also Nubble Bonuses and Double-Nubbles, but if you want to find out what those are you should play the game.  Even with the Nubbles (double-nubbles involve prime numbers – but don’t worry, you don’t have to know anything about prime numbers), it’s a very easy game to learn.  Also, you don’t have to be great at math since there are ‘cheat charts’ provided.

Number Quest is like a two-player strategy game combined with favorite elements of other types of board games, except the best thing is, you can have up to four players.

Here is a picture of the game board; evidently the game used to be called Nubble. 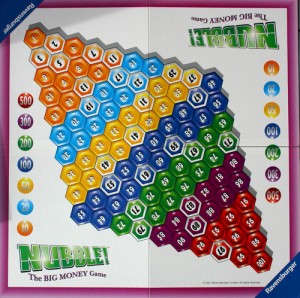 And another fun thing about Number Quest is how the game ends: it is over when there are tokens on numbers connecting the 1 and the 100 all the way across the board, and the player with the most money at that time wins.  Also, there are LOTS of variations to the game; there’s a kid-friendly version, you can try playing with a timer, or you can even try ending the game based upon a previously agreed upon time limit or money amount instead of when the tokens stretch across the board.  The game is educational for kids, and a great way for adults to exercise their brains, especially if you don’t use the cheat chart.  Upon first playing, I would give it a 9/10, but keep in mind that we didn’t even get in a full game due to time constraints.  But it seems like a really fun game and I’m looking forward to trying it with 4 players!