Labor day weekend was a busy one, but it was packed with lots of fun family time.  On Saturday, we packed up the kids and drove out to South Bend Indiana which is kind of a hike but worth it as you’ll see in a minute.  They have a nice little zoo there, the Potawatomi Zoo, and our Toledo Zoo membership gets us in free in South Bend also.  There is also Megaplay, a fun place for the kids (and adults!) to play.  But this is the first time we’ve been to Megaplay when my son is old enough to play there, and he thought the ball pit (perhaps one of the last remaining in the world?) was just about the best thing he’s ever seen!  After Megaplay, we were all starving,  and some research on the internet before we left told us that a favorite place of ours on the way back from South Bend (Dakota’s in Elkhart Indiana) had closed.  So we were left to find something new, and that we did – there is an excellent BBQ place right across the street from Megaplay.  They had the best dessert I think I’ve ever had: pig ears, which is some kind of fried dough with butter and brown sugar or something else yummy sprinkled on top.  I’m not normally a dessert person, but I probably would have taken on all 4 of my kids for a pig ear.  It wasn’t necessary though, since I ate theirs while they were in the bathroom 😉

Last time I blogged about Megaplay, I think I mentioned how the strip mall where it’s located looks like it’s from the 80’s.  I don’t know how else to describe it, but every time I’m there, I feel like I’ve been in a time warp.  It’s difficult to explain, so I tried to take a video, but it didn’t turn out.  Next time…

Sunday was kind of a restful day, and each of our two oldest daughters had friends over.  They were well behaved friends, and we had fun.

On Monday, my husband had to work unfortunately, and rather than try to pass all day with all 4 of my kids at home, we took off for the Toledo Zoo.  I know, 2 zoos in 1 weekend?  But what can I say, I am a zoo addict.  The only problem was that the zoo was MOBBED – probably the most crowded I’ve ever seen it.  Good for the zoo, but not for the mom there by herself with 4 kids trying to navigate a large double-stroller through the crowds.  We couldn’t get near the great apes to see them, and the rest of the animals weren’t doing much of anything except for the hippos.  Toledo has an underwater viewing glass on the hippo exhibit, and their two extremely large hippos kept swimming past.  One opened his mouth underwater, and the other one rose out of the water, opened his mouth REALLY wide and shook his head back and forth; it was great.  The hippos made the entire trip worthwhile.  Not that a trip to any zoo could ever be a waste of time for me.  Even  if I can’t see that many animals, there is just something about zoos that make me feel happy and peaceful.  Besides, the kids got to play on the playgrounds for a long time, so they were happy too.  The only problem was we had such a big day that all of the kids fell asleep on the way home.  And the 4:00 nap did not set them up to go to bed at a decent hour to get enough sleep for school on Tuesday after their long weekend.  Oops…

We got back home only 10 minutes late (there was traffic!  Labor Day, who’d a thunk?) for our dinner date with Dad.  Last week we discovered that Friendly’s restaurant has kids’ nights, which means that kids eat free with purchase of adult meals.  That means for our family of 6, we leave with a bill of just over $20 to eat out, and that includes all we can drink (kids too, and they don’t have to get water – they love this!) AND dessert for all of us.  But while we were eating, the lights kept flickering; they went out but came back on again.  But then they flickered again and went out for good (we still don’t know why, there was no storm or anything).  But luckily we had already eaten, so we didn’t really have anything to worry about.  The kids were a little frightened, and of course all of a sudden the 3 girls had to use the bathroom, which had the employees scrambling for a flashlight for us to use.  As I held the flashlight for my kids in the bathroom, we had a little talk about Amish people and how they live and how maybe the rest of us are too dependent on electricity.  I made a bad joke about my black raspberry sundae since I was eating it in the dark, and that’s where I got the title for this post.

So overall, a great weekend, though I should add one thing.  At Friendly’s, my husband overheard a college-age kid at the next table mutter something rude after our family prayed before our meal – “Jesus freaks”.  I feel badly for him that he has to think that about people who appreciate taking time to thank God for their blessings throughout their days.  We were quietly minding our own business, so his comment was completely unnecessary.  We do our thing, he can do his.  I didn’t even say anything when he and his friends were casually tossing around the f-word during their meal, even though my kids were sitting right next door.  But people are people, and as I said, I feel badly for him.  Besides, God gave us an opportunity to really help someone before we left the restaurant, and I hope that maybe our kindness can show the light of God to others.  Maybe the mutterer was still there to witness God at work.

Hope your Labor Day, your “last hurrah of summer”, was safe and happy.  Here are some pictures from our wonderful weekend: 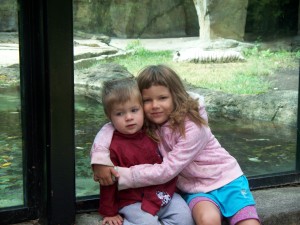 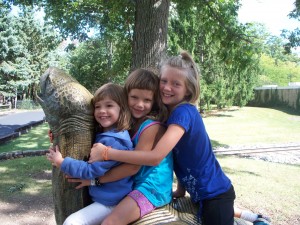 Ok, and I have to include the following pictures for the Star Wars fans.  Megaplay has all these life-size cardboard cut-outs of Star Wars characters hanging up.  Sorry the pictures aren’t better, but I took them from far away since I was trying to fit as many into the pictures as possible.  Look for them high on the walls, near the ceiling: 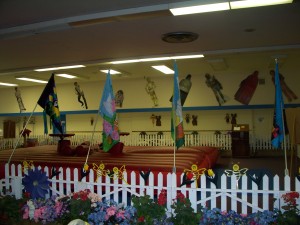 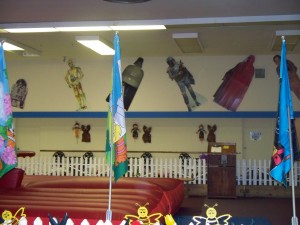 And my favorite of the cut-outs – I’ve always liked Marvin the Martian: 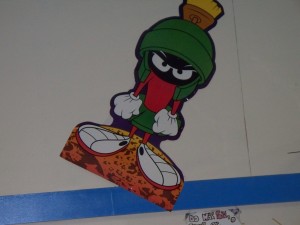