This past Saturday, April 10, 2010, marked 11 years of marriage for my husband and I.  Since it was a weekend, and we treasure that as family time, we didn’t think about calling the babysitter to get some alone time.  A generous friend stepped up and offered to watch the little ones for a few hours for Hubby and I to have some alone time, and we contemplated our options that morning.  I love the zoo, but it seemed like too big of an endeavor to travel all the way to Toledo after staying up until 3 the night before for game night.  We had an awesome time Friday night, but note to self – no more game nights the day before our anniversary!  Boy, were we tired on Saturday!  So anyway, we ditched the Toledo idea, and we thought about just staying home since Zambrano was scheduled to pitch for the Cubs, and he is always entertaining.  Finally, my husband came up with a great idea – we’d go to Buffalo Wild Wings, and our friend could take the kids across the street to Menards to play while we sat and watched the Cubs game at Wild Wings.  Before you think I’m nuts, I should mention that Menards (at least our location, anyway) has a hugely awesome indoor play area for the kids – they have many of their playground sets, play houses, and sandboxes on display for people to see and for kids to play in while parents shop – our kids love it and always have a blast, plus it’s free!

So Hubby and I sat at Buffalo Wild Wings and watched the entire Cubs game on Saturday!  And, as a special Anniversary present to us, Zambrano led them to victory!  They started out playing terribly, but turned themselves around (which is rare for the Cubs!), and actually looked pretty good by the end of the game – I’m talking diving catches, great plays, homeruns, and most importantly, turning a 3-0 deficit into a 4-3 victory!  YES!!

And I have to add that Buffalo Wild Wings was actually a great, albeit non-traditional place to celebrate an anniversary.  Not only did they not mind us sitting there for hours watching the game, but they were happy to accomodate us in letting us choose which channel we wanted, AND they gave us a hat with 4 balloons attached to take home for our four children.  AND a free anniversary dessert!

After watching the Cubs win, we got the kids and took them over for some go-carting.  Always fun, and this is the first time in a long time no one had to sit out with a baby!  Our son is old enough to ride this year, and although he was apprehensive at first, it only took him until the first turn when he began squealing with joy!  First time he rode with Dad (because everything is less scary with Dad), and I was able to snap this pic before we took off: 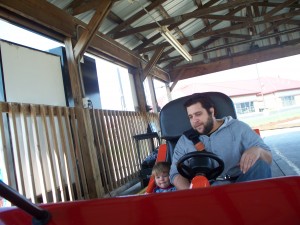 Then I got to take him on the second time, and he was such a wonderful little passenger; he had so much fun!  As I was riding in the beautiful weather with my little guy next to me, I had the thought, “It doesn’t get much better than this!”

Happy Anniversary, Honey, it was a great one, as always!  And thank you for eleven wonderful years of marriage and for four beautiful children!  I love you!

4 thoughts on “Our Eleventh”