When friend and fellow blogger Derek came to visit last weekend, he brought along his blu-ray player.  For those of you who don’t know, that’s a type of movie player which plays a special kind of dvd in high definition – hope I explained that well enough; it’s not like I know that much about it myself.  So anyway, we chose the movie 21 – even though I’ve seen it, it was interesting to see it in superior visual quality.  I really didn’t think I’d notice a difference – it’s not my style to care about such things, but I actually did notice the clarity.  I could actually see the grain on the paper of the deck of playing cards.  And the opening scenes of the movie are sweeping views of the city of Boston, which were really enjoyable eye candy on the blu-ray.

So anyway, while watching the movie again, I began to wonder exactly how much of it is a true story.  I have my laptop right in the living room, so I looked it up while watching the movie.  It was interesting because Jeff Ma, the “real” Ben Campbell (the main character in 21) actually makes a cameo in the movie -and I found this out in enough time to be able to spot him.  I found out a bunch of other interesting info as well, and here is a cool site called chasingthefrog.com where you can compare famous movies with the stories upon which they were based.  Here I  found out that Jack Dawson’s sketches in the Oscar-winning movie Titanic were actually drawn by the movie’s director, James Cameron.  Not that I can stand that movie – it think it’s horribly exploitative to invent a romantic plot not even remotely based on reality about an historical disaster which claimed thousands of lives.  I decided to give it a shot once, and I tried to open my mind a little, but I still didn’t like what I saw – it seemed cheesy, hokey, and unrealistic, not to mention that it almost cheapened the very horrendous event whose story it attempted to tell.  Anyway, I also found out from this site that there was only one black victim of the Titanic disaster – a second class passenger named Joseph Phillippe Lemercier Laroche.  As the website tells it, he loaded his wife and daughters onto a life boat and went down with the ship.  Even more sadly, his wife gave birth to their son later that year.  Here is a family picture: 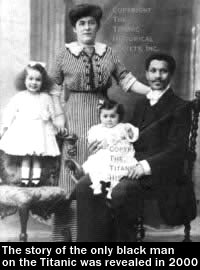 The site only has a handful of movies to compare to actual events, but its comparisons are very interesting and insightful; including a picture to picture comparison of people and the actors who portrayed them – very cool, check it out!

7 thoughts on “Chasing The Frog”