I just love it when our pastor’s sermons speak to me, which is actually quite often as he is a powerful speaker.  A few weeks ago, he was speaking of the relationship between Paul and Timothy, and the discussion that followed was of kindred spirits and soul mates.

This sermon made me think of my husband – we’ve always known we were made for each other.  And that leads to a funny story: just a few days before we heard this sermon in church, I was at the library looking for a movie to pick out for Hubby and I to watch that night.  My eyes fell upon UHF, a goofy late 80s comedy starring Weird Al Yankovic.  I  thought to myself, “He won’t want to watch that.” and I passed it up.  Later that night as we were picking a movie to watch, my husband says, “I feel like watching UHF, but we don’t have it.”  I could not stop laughing as I told him about how I thought of him in the library that day, and we had a good laugh together.  He had seen UHF years ago but not since and never with me (I had never seen it).  It’s not like it was one of his favorite movies or one he often felt like watching, and we had probably never even discussed it together.  Yet of all the movies just to randomly pop into our heads that day, we shared a random thought that was UHF.  🙂 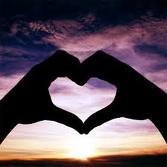