Last Saturday night,  because the temperature wasn’t too bad, we went for an evening family walk and took the kids to Walgreens for milk.  Even at just 6:00, it was already completely dark outside, and a dense fog was starting to settle in, so Hubby and I decided it was a perfect night to watch a scary movie.  The only thing is that we watch A LOT of horror movies, and most of them just aren’t scary anymore.  Call it desensitization to the horror, or maybe it’s the fact that we have 4 kids and it’s difficult to find something scarier than say, 3 of them being wide awake at midnight or someone taking off their dirty diaper and making a mess with it.  But whatever the reason, it’s hard to find a movie that will actually scare either of us.

While we were trying to choose a suitable scary movie, we came across Stephen King’s IT.  My  husband was skeptical, but I was certain it would be terrifying, so we gave it a try.  And I was right, well partially right anyway – the first time Pennywise the horror clown was shown on the screen, it was so creepily done that my husband grabbed ME and not the other way around – which was only actually because I couldn’t even watch it; it was so scary!  Unfortunatley, my husband was no longer scared once Pennywise began to talk, but I was creeped out by the entire movie…  well, at least until the end, when the big showdown scene completely disappointed me and took away my fear – that’s all I’ll say, don’t want to spoil it if you haven’t seen IT. 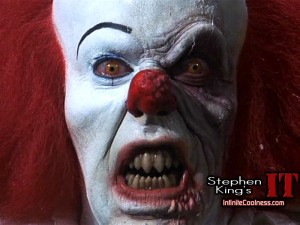 I like to research movies that I watch; I look them up on imdb.com to see if I’m correct when I recognize actors from other movies.  When I looked up IT, I came across information that pointed to the theatrical release of an IT remake in the near future – I’m there!!

I think I might want to read Stephen King’s IT the novel first before I see the remake maybe; I’ve been thinking about what to read after I finish the 2nd Harry Potter book, Harry Potter and the Chamber of Secrets.  It’s going kind of slowly for me; I think I’m ready for a break from Hogwarts – some Stephen King should do the trick!  Then again, maybe not, I’ve been  having enough trouble sleeping as it is – matter of fact, I go in for a sleep study later today.  That’s all I need is to get my sleep problems under control and then give myself nightmares by reading scary books…  But anyway, wish me luck – I’m a little nervous about the study (I don’t know what I do in my sleep, and I don’t know how I feel about strangers knowing what I do when I sleep – that’s kind of personal!  Plus I’m going to miss my family like crazy and worry about them.  I hate sleeping in hospitals, but at least in the past, I’ve had a newborn baby to cuddle!).

Click here if you want to do more reading about the IT remake – but keep in mind that this article complains about the same spoiler at the end of IT that I hated, so if you don’t want to know what happens, don’t read it!  And one more thing…  I thought Tim Curry was just excellent in IT.  He was unrecognizable, which was probably part of the charm!